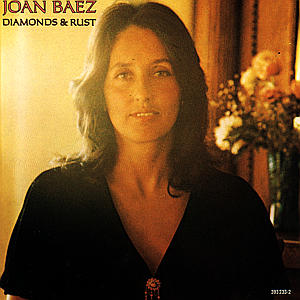 I wasn't going to discuss Diamonds & Rust - Joan Baez's most important and popular album after featuring its title track as an Almost Hits entry a little over a year ago - but I've changed my mind because of the huge influence this record had on my musical life.

Diamonds & Rust came out in 1975 as my college days were winding down and I was immediately attracted to it in large part because of Baez's sublime vocals. I've always been a sucker for great singing and conversely, vocals are one of the reasons I had a whole lot of trouble listening to many of the highly regarded singer-songwriters of the day. Based only on their voices I mostly found Bob Dylan, John Prine, Tom Waits, Randy Newman, Elvis Costello, Bruce Springsteen, and a few others quite taxing on my ears. I didn't care if these artists had anything important to say because I couldn't get past their voices. I asked myself, why, oh why, are so many of the most highly regarded songwriters bad singers?

I was never totally closed minded about Dylan. I was already familiar with how easily The Byrds and Peter, Paul, & Mary made his work more accessible so I was fully aware of his greatness.

The second reason I largely ignored many singer-songwriters was because at age twenty-one I was still a rocker at heart. British prog-rock and blues, power pop, and a few of the more upbeat Laurel Canyon stars were the artists whose records you would usually find spinning around on my turntable.

Baez admitted she made Diamonds & Rust to reach a larger, more mainstream audience. She easily achieved her goal and because of it she was heavily criticized by much of the music press as a sell out. Her days as a pure folky were over even though she never totally abandoned her roots.

The album's title track - about Dylan, Baez's ex-lover - was discussed here extensively so other than to say it's her finest composition, and you must listen to it, I'll move on. She also wrote "Winds Of The Old Days" another song about him but with a different perspective; "Children and All That Jazz," a track that offers her observations about raising kids and parenthood; and "Dida," a piece with wordless vocals on which she shares the lead with Joni Mitchell.

Those four songs are all good ones and are worthy of your attention but the reason this album was so important to me is because the remaining seven tracks, all of them covers, played a huge part in changing my mind about singer-songwriters.

Baez's take of Jackson Browne's "Fountain of Sorrow" made me realize that he is one of America's top songwriters. It was the first time I paid attention to his lyrics in detail. Her strong singing forced me to go back and listen to Browne's first three albums - that my girlfriend, who is now my eternally young looking wife - already loved.

Browne's voice, while always listenable, has improved greatly since his 1972 debut album when he had to strain to reach a few high notes. I've enjoyed the Californian's work immensely for a long time now and I've seen him in concert more than any other major artist.

I felt exactly the same way about Baez's cover of Prine's "Hello In There." I had heard him sing before and found his voice unappealing. Her take helped change my mind about the man whose debut record has become my favorite singer-songwriter album of all  time.

The folkie's complete makeover of  Dylan's "Simple Twist of Fate" transformed it into a rock song that included her perfect impression of the man from Minnesota.

Based only on her vocals I also preferred Baez's cover of "Jesse" to Janis Ian's original.

Baez kept Stevie Wonder's outstanding "Never Dreamed You'd Leave In Summer" as a ballad. While it's not superior to the Motown superstar's original her love of the song and her treatment of it can make you just as emotional as his version does.

The album is rounded out by another single, The Allman Brothers' "Blue Sky" (#46 on the Hot 100), and a nod back to Baez's folk roots with "I Dream of Jeannie/Danny Boy."

Today, I've long gotten over the vocal deficiencies of Dylan, Prine and The Boss. I no longer find their singing intolerable even though they can never be mentioned in the same sentence with the great vocalists of all time. What can easily be said is that their voices are appropriate for the kind of music they make and that means they are all good enough.

I agree with the words of Josh Jackson, editor of Paste Magazine. In his editorial on page 14 of the June/July 2006 issue he wrote, "Much like Hollywood thrusting star-power and jaw-dropping special effects upon shallow, unbelievable scripts, the record industry has been pouring money into beautiful people with beautiful voices (or at least beautiful people with Auto-Tune) without giving them songs with any kind of lasting impact. But I'll take a Leonard Cohen album (despite not loving either his voice or the production on most of his songs) over just about anything getting Top 40 airplay today," and that is how I feel about most of the singers mentioned at the top of this article.

It's fair to say that I probably would have taken a deep dive into these artists' catalogs later as I matured and grew older, but the profound influence Diamonds & Rust had in guiding me in their direction can never be underestimated, and for that, I have Joan Baez to thank.