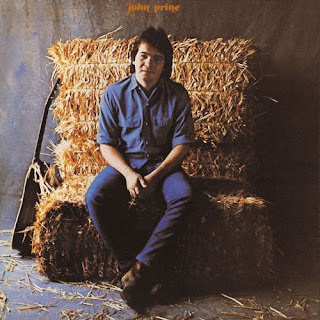 About Bob Dylan, AllMusic wrote, "As a vocalist, he broke down the notion that a singer must have a conventionally good voice in order to perform, thereby redefining the vocalist's role in popular music."

John Prine never possessed a great voice either but it doesn't matter. Based on the above statement the vocals on his outstanding, eponymous debut are just what you would expect them to be and it is how they should be for the kind of music he makes.

While Dylan rightfully gets all the credit in the world for making artists like Prine possible it's easy to say the latter's debut LP eclipsed Dylan's because it's songs were all originals while the Minnesotan's first record mostly consisted of covers.

It's also easy to say that Prine is among the very best composers of the second half of the Twentieth Century and early on he made an album that would go down in history as one of the top ten singer-songwriter albums ever recorded.

Prine showed his sense of humor on the opening track, "Illegal Smile," which, of course, is about marijuana although Prine claims it isn't. In the liner notes of his anthology, Great Days, he wrote that it is "not about smokin' dope. It was more about how, ever since I was a child, I had this view of the world where I can find myself smiling at stuff nobody else was smiling at. But it was such a good anthem for dope smokers that I didn’t want to stop every time I played it and make a disclaimer."

Prine proved quickly that he is a masterful story teller who can make you feel all kinds of emotions through his songs. The folkie tugged at your heart strings with his sad stories of a decorated, drug addicted, Viet Nam veteran, "Sam Stone," who meets a very tragic ending and the loneliness many elderly people experience on "Hello, In There."

Then of course, there is Prine's most famous song, "Angel Of Montgomery," a standard that has been covered by more artists than we can count. When it was suggested that the singer write another song about old folks he quickly rejected the idea because he already said everything he needed to on the subject. That conversation led him to write a song about a woman who felt she was much older than she really was and wanted to become an angel so she could fly away from her drab life.

"Your Flag Decal Won't Get You Into Heaven Anymore" is an anti-war protest song, a common topic in 1971. It too deals with death but in a more humorous way.

"Pretty Good" is the most obvious rocker. Lyrically it's quite dylanesque with lines like "I heard Allah and Buddha were singing at the Savior's feast, And up in the sky an Arabian rabbi fed Quaker Oats to a priest."

"Paradise" is for Prine's Father and is about the harm caused by strip mining in Kentucky.

With only a couple of exceptions the set's thirteen arrangements never stray far from folk or country but they're tastefully augmented by electric and steel guitars, piano, organ, and drums. Prine played acoustic guitar.

Considering that this is probably Prine's most loved and well known record it's hard to believe it never got higher than #154 on the American album charts.

ADDENDUM
For those of you who desire to read more about John Prine please see the tribute article posted by this blog on April 7, 2020, the evening of his passing.