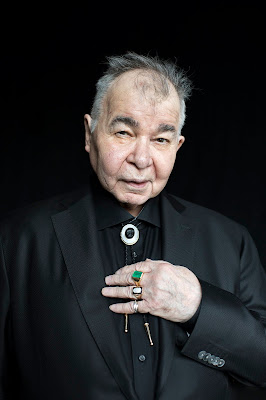 Unfortunately, COVID-19 has taken another life. This time it belonged to outstanding singer-songwriter John Prine. He was seventy-three. Not only is this another unnecessary loss of life it's a sad day for the music world because he was a rare and significant talent.

Prine's wife and manager, Fiona, also contracted Coronavirus but she has since recovered.

I started listening to Prine's music way too late in life. I wasn't deliberately ignoring him. It was just that his work never seemed to cross my path. I was quite familiar with "Angel From Montgomery," "Hello In There," "Paradise," and "Sam Stone," all from his brilliant 1971 debut LP, along with a handful of other tunes such as "That's The Way The World Goes Round," but not much else.

I finally purchased Prine's eponymous debut a couple of years ago. After just one listen I couldn't get the album out of my car's CD player for weeks. It quickly became the best singer-songwriter album I've ever heard by anyone. (Read Bloggerhythms' review here.)

Prine was employed as a mailman when he was discovered by Kris Kristofferson who helped get him a recording contract. Around the same time movie critic Roger Ebert wrote the first ever review of a Prine performance and gave it a huge thumb's up. Both men believed he was as good as Bob Dylan and I heartily agree. His thoughtful record, on which he synthesized folk, country, and rock into a style all his own should never take second place to anything the esteemed bard ever released.

Prine never sounded as self-important as Dylan, in part because his sense of humor was more apparent, a personality trait that "The Voice Of The Generation" didn't display often enough in his songs. "Illegal Smile" and "Your Flag Decal Won't Get You Into Heaven Anymore" are as bitingly funny as "Sam Stone" is terrifyingly depressing.

After listening to "Hello In There" you realize how astounding it is that a twenty-five year old understood the loneliness often felt by senior citizens. Most young adults that age are still too self-absorbed to notice or care. (Here is a recent article from Newsweek that digs deeper into this great song.)

The singer-songwriter continued to perform live and record until recently despite two major battles with cancer. He had a lung removed in 2013 and fifteen years earlier he suffered from cancer in his neck that severely altered his voice even after a long period of therapy. That condition is quite apparent on his final album, the very good The Tree of Forgiveness, released in 2018.

Prine was a recipient of multiple Grammy Awards and, although it should have occurred much earlier, he was finally inducted into the Songwriters Hall of Fame in 2019. He has been nominated for the Rock & Roll Hall of Fame but he did not win enough votes to be enshrined.

Ironically, Prine's last song from his final album is "When I Get To Heaven." Check it out below with some other gems. It's a humorous track that feels really sad today.