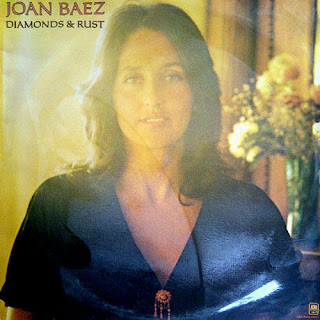 Joan Baez was never known for having hit singles yet she was a truly popular artist with a golden voice and she proved it with Diamonds & Rust, the title track from her most popular album.

Baez was always a composer of note although she recorded far more cover versions of other people's work than many of her songwriting contemporaries. If the singer-activist believed in a song she wouldn't hesitate to record it regardless of its roots. She even covered rock songs. Her treatment of Dire Straits' "Brothers In Arms" is a totally satisfying surprise.

Folk musicians (i.e. Baez, Pete Seeger, Woody Guthrie) mostly sang about traditional cultures, politics, or social ills and primarily employed acoustic instruments whereas the singer-songwriters who rose to prominence in the 1970s (i.e. Jackson Browne, James Taylor, Carole King) often sang about more personal issues, looking inward for their material that was sometimes influenced by rock music. The two genres frequently crossed over with each other and that is the situation we have with "Diamonds and Rust," a song that only reached #35 on the Hot 100.

"Diamonds and Rust" is among Baez's most loved works and it's famous for being about her relationship with Bob Dylan who rose to stardom at very much the same time she did. The song's title refers to the memories she still holds from that relationship a full decade later.

Listening to the song it appears that Baez never really got over Dylan. At first she told the famous folkie the track was not about him even though many of the lyrics made it obvious that it was. The song never mentions him by name. Instead, Baez told him the subject was David Harris, her ex-husband. As the lyrics say, Dylan was the one who "burst on the scene already a legend" when he came into her life. Later, she freely admitted the song was about the native Minnesotan.

"Diamonds and Rust" has beautiful lyrics and a gorgeous vocal but it was not the kind of song that made the charts often, even back in the eclectic mid-70s. It's a miracle it got as high as it did on the Hot 100 even though it deserved better.