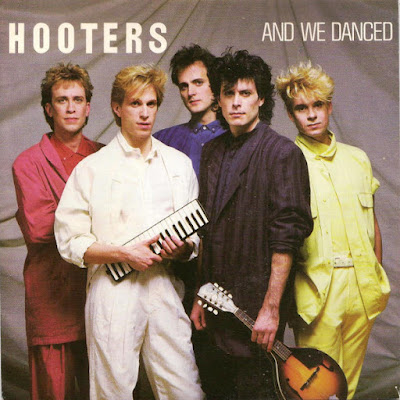 I can't tell you how many times I saw The Hooters live in the 80s. At the time it felt like they were going to be the biggest local act from Philadelphia to ever hit the big time even though I knew Hall & Oates, Todd Rundgren, Bobby Rydell and much of the Gamble and Huff roster - among others - had already acquired substantial national reputations for their efforts.
The quintet, led by Rob Hyman and Eric Bazilian, combined power pop, ska, and reggae into something unique, and the home town crowd couldn't get enough of them. It's sad that their day in the sun didn't last more than a couple of years despite winning a coveted opening slot at the Philadelphia portion of LiveAid. (Below, you can see their entire twelve minute performance that opens the famous benefit concert with the song we're saluting today.)
"And We Danced" is the first single from The Hooters second LP and the first one from Nervous Night, their major label debut on Columbia Records. It reached #21 on the Hot 100. It did better in Australia, where it climbed all of the way to #6. Their only song that did better on the American charts was "Day By Day" (#18) from the same album.
By the time The Hooters were regularly making records most of the Jamaican influences were gone although the power pop remained and still dominates their repertoire to this day. The proof is "And We Danced." It's a high energy track - that true to its name - will make you boogie in the aisles at any of the band's concerts. It features Hyman on the group's signature instrument, the melodica, whose nickname, the hooter, was adopted as the band's moniker. The handheld keyboard with a mouthpiece has always been an integral part of their work and added a unique flair other bands didn't offer.
Be sure to read another post about The Hooters' very early days in Philadelphia.
________________________