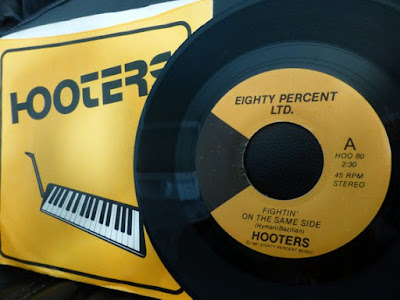 Before The Hooters signed with a major label in the mid-80s, before they opened the Philadelphia portion of Live Aid, and eventually became bigger stars in Europe than here at home, they were undoubtedly the most popular and best unsigned band performing in and around The City of Brotherly Love.

Having seen the quintet several times before they ever released an album I can assure you that they were definitely at their peak as a live act during those early years. They embraced their love of ska and reggae and mixed them with a heavy dose of power pop.

The second time I saw The Hooters they employed a horn section for their show at a now defunct Philadelphia venue, The Ripley Music Hall, in November 1982. The brass added a dimension to their sound that I never heard from them again. It was a long time ago but I remember it as a really great evening of music.

During these pre-stardom years The Hooters issued two independent 45 RPM singles. The first one was "Fightin' On The Same Side" (1981). A similar take appeared on their LP, Amore, another independent release that sold over 100,000 copies in Philadelphia in 1983. Then finally, it was issued in a very different version on their second Columbia LP, One Way Home (1987).

The flip side (remember them?) was "Wireless." It was "dedicated to the memory of Bob Marley" and was a real gem. It was a concert staple for The Hooters in those early days but once they hit the big time they completely abandoned it.

Both tracks were written by Rob Hyman and Eric Bazilian, the two main Hooters. Joining them was David Uosikkinen, the only drummer they ever had. Two other original members, both gone before the group's record deal was in place, were guitarist John Kuzma and bassist Bobby Woods. 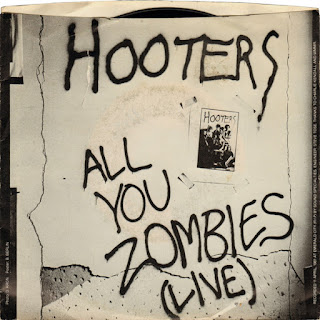 A second single, a live version of "All You Zombies" b/w "Rescue Me," was subsequently released with the same lineup. A studio version of "Zombies" was also included on Amore. It was then redone and became an important track on their smash hit, Columbia debut, Nervous Night.

By the time The Hooters went national their Jamaican influences mostly disappeared and their pop side became dominant. Nevertheless, because Hyman and Bazilian are excellent composers they were able to hit pay dirt with their songwriting. The latter wrote "One of Us" for Joan Osborne while Hyman composed "Time After Time" with Cyndi Lauper.

The Hooters still play around Philadelphia today and all over Germany where they have always been very popular.

The group never made a bad record but listen to these early tracks and you can hear what you missed while they were strictly a local phenomenon.