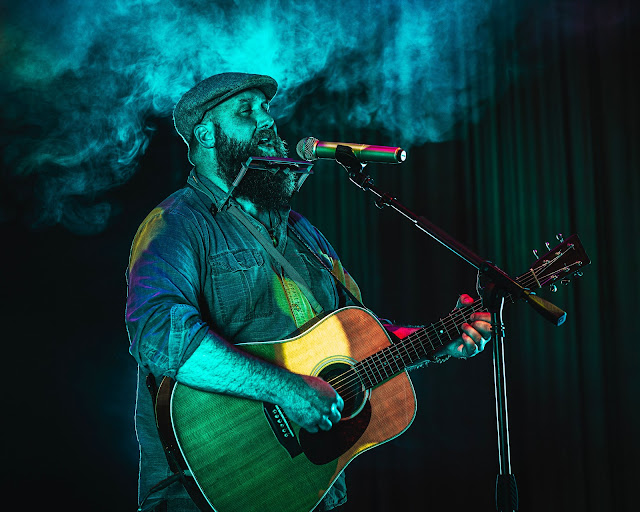 Jonathan Foster was featured on Bloggerhythms just a little over a year ago with a discussion of his fifth full length album, Lantern Shade. While readers may disagree, I wrote in that post that Foster is more of a singer-songwriter than a folk musician because there is a little bit of pop and rock in his music. However, he jettisoned those influences completely while making "The Mountain Echo," his quite satisfying brand new single and video.
Previously, Foster always recorded with the intent of releasing an entire album, but he's doing things differently this time around. When asked if a new album is forthcoming the Californian explained, "For now, this is a stand alone single that has come out of a new batch of songs I've been working on. The hope will be to continue to work on new songs individually for the rest of the year while touring, and with any luck a new album will get developed as a result for a release next year. This is a change in approach from how I have completed projects in the past and we'll see how and where it goes from here. I was pleased how efficiently this came together with my long-time collaborators being involved - Joe Mistal on drums, Bruce Turgon on bass, and featuring Morgan Hannaford on mandolin."

Foster also discussed his inspiration for the track. "It's certainly a nostalgic song. I attended Clifton-Fine Central School from Kindergarten to 12th grade graduation in Star Lake, New York, and the yearbook there is entitled The Mountain Echo which I thought would make for a fitting folk song. The visions in the lyrics come from the cold run before soccer practice, the first outdoor baseball game of the year, school dances, the sensory overload of adolescence, feeling stuck in a small town, how fast it actually goes by, and a reminder that the only constant in life is change (along with a team nickname change from Indians to Eagles)."

The accompanying colorful video is a "self-made creation" that - unlike many of those produced during the heyday of MTV - is actually related to the topic of the song.

Unlike a lot of musicians who run out of fresh ideas as their careers progress Foster is one artist whose work continues to impress.

"The Mountain Echo" is easily available to the public. This could change of course, but currently you can find it on many of the popular streaming services: Pandora, YouTube Music, Spotify, Deezer, and iHeart. You can also purchase it from Bandcamp, Apple Music and iTunes.
You can discover more about this talented songwriter on his  website.
Folk Jonathan Foster Singer-Songwriter