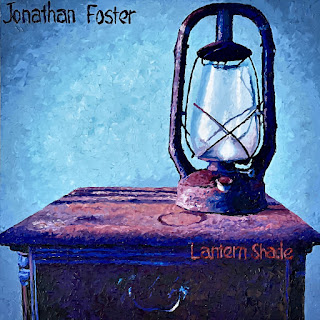 Lantern Shade, Californian Jonathan Foster's fifth, independently released, studio CD is a beauty.
The press release aptly states "the album steers towards the rock side of modern folk music," meaning Foster is more of a singer-songwriter than a folky, and that's a good thing. It makes his work more accessible without sacrificing the contemplative, lyrical aspects of folk.
A hallmark of all excellent singer-songwriters is that they avoid superficiality and Foster is no exception. While thoughtfulness is still needed to fully absorb his introspective songs they avoid the head scratching opaqueness that often pushes some music fans away from the genre.
"Alpine Line" is one of the set's fun tracks. It's a welcome contrast when placed next to "The Beast," a social commentary piece minus the preachiness that often accompanies songs of this type. The catchy "Where We Belong" - a favorite of Foster's - is an upbeat celebration of life. So is "May Our Paths Cross Again" and let's not forget the instantly memorable single that opens the album, "Stardust Saltwater."

Foster's appealing voice is quite appropriate for the kind of music he makes and he also possesses the ability to write melodies that stay with you long after the album is over.

Foster plays acoustic and electric guitars, woodwinds and percussion. Co-producing the record with him is  Bruce Turgon who adds bass, 12-string guitar, organ, piano and mandolin. The drummer and percussionist is Joe Misztal. Morgan Hannaford plays mandolin on "Where We Belong." Despite working with such a small group Foster and Turgon's productions sound bigger than the band's size would indicate while never adding more to a song than what is absolutely necessary.