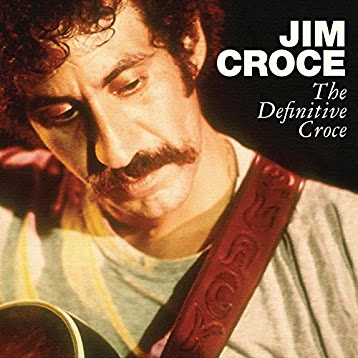 During my college years of the early 70s I played Jim Croce on my radio show mostly because the station had a required playlist that every DJ had to follow. It wasn't the hippest college station in the world and every third song we played had to be from that list. I liked Croce more than most of the other atist's records we were forced to spin so I didn't really have a problem airing his stuff.
I knew all about Croce, his eight top 40 hits in about eighteen months (including two #1s), and the tragic plane crash that took his life at age thirty.
I also knew Croce was a local boy who spent most of his youth in Upper Darby, Pa, but what I didn't know is how highly respected he was as a singer-songwriter. I plead ignorance in that regard unless his reputation as a great, working class storyteller grew over the years and elevated him above the status of just being another 70s soft-rocker. He never became the rocking showman or icon Bruce Springsteen is but he mined much of the same lyrical territory.
A typical example of a Croce song as discussed on Wikipedia was from his last top 40 entry, "Workin' at the Car Wash Blues."  He told a live audience that "the song is a story about a guy who thinks he should be ruling the universe somewhere, but he is really working at a car wash."
The title song from his first hit LP is about a dumb pool hustler who still won a lot of respect because he is a tough guy. Croce sang, "You don't tug on Superman's cape, You don't spit into the wind, You don't pull the mask off the old Lone Ranger, and you don't mess around with Jim."
Croce could also get philosophical. "Time In a Bottle" offers his thoughts on mortality. It was released as a single only after his death and the timing almost certainly helped it become the second of his two chart toppers. He could also write a straight ahead love song. "Every time I tried to tell you the words just came out wrong, so I'll have to say I love you in a song."
As a singer, the star had a pleasing but earthy and easygoing vocal style that perfectly suited his songs. His voice didn't change whether he was rocking out on "Bad, Bad, Leroy Brown" - his first #1 - or singing his sad and lonely Christmas ballad, "It Doesn't Have to Be That Way."
Croce released three full length LPs containing thirty-four songs from April 1972 through December 1973, the final one completed just before his death. All three were huge hits. You Don't Mess Around with Jim was #1 on Billboard's album chart, Life and Times reached #7, and I Got a Name, #2. All three LPs were certified gold records in America. These are the albums that are presented in their entirety on The Definitive Croce, the two CD set that is also available as a download for just $6.99 on iTunes. If you don't own all of Croce's three critically acclaimed works this is your chance to complete your collection.
I own the download version of the set so I'm not aware of any accompanying liner notes, but the only drawback I have about it is that the songs are not in order of release by either album or single. I don't know why that is the case, but an ambitious iTunes user could easily redo the albums in their proper song order by making their own playlist and changing the album art to the corresponding cover.
Most people aren't aware of this, but Croce made two albums prior to his big three. In 1966 he recorded Facets, a release limited to only 500 copies. It's available on Amazon at collectors prices but can be gotten for a lot less on iTunes. The overall sound is not up to Croce's usual professional standards as it was a self-released record. Three years later he issued an album with his wife, Jim & Ingrid Croce.
The producers on all three of Croce's hit LPs were Terry Cashman and Tommy West, two New Yorkers who had a recording career of their own.
Croce's son, A.J, Croce has had a mildly successful career as a singer-songwriter.
Here is the late singer's official website.
Jim Croce Singer-Songwriters Soft Rock