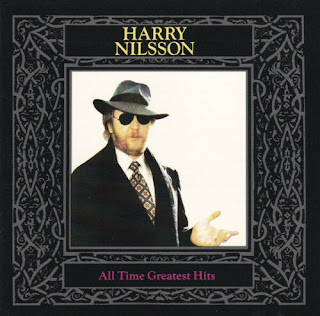 I must confess that I've never listened to the late Harry Nilsson very often outside of his long string of hit singles. After all, who has the time to listen to every album ever recorded except for maybe Stephen Thomas Erlewine of AllMusic. I never owned any of Nilsson's albums until I paid $2.00 last week for All Time Greatest Hits at a local country fair. Before that, I only ever bought one of his 45s - his first big hit, "Everybody's Talkin'" way back in 1967.
The few Nilsson albums I've sampled pieces of were quite inconsistent, so for casual fans this twenty song collection is definitely the way to go. All of his huge hits are included on this set along with a few minor ones.
What is most noticeable about Nilsson is his eclecticism. While he does not sound like The Beatles their influence is obvious. Listening to the pop-rocker reminds me of the group's White Album, because just like the Fabs, Nilsson was not contented to work within a defined genre. His influences came from everywhere, and as the great Liverpool quartet proved, that's a very good thing if you have talent and imagination.
"Everybody's Talkin'" and "I Guess The Lord Must Be In New York City" are singer-songwriter fare. "Without You" (written by Badfinger) is an overly dramatic ballad that became Nilsson's only #1 single. "Without Her" became a well-covered jazz standard, but Nilsson conceived it as a classical arrangement with a pop vocal. "Coconuts" is just plain goofy and "Jump into the Fire" is a screaming rocker. "As Time Goes By" is a string laden take on the Great American Songbook. It's all enhanced by Nilsson's three and a half octave vocal range.
Nilsson still has an official website that is full of useful information.
Classic Rock Harry Nilsson Pop Vocals