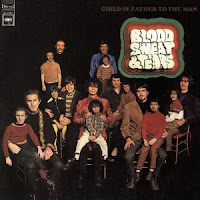 Al Kooper had already established himself in the music business in several ways by the time he organized the eight piece horn-rock outfit, Blood, Sweat, and Tears. He was a member of Bob Dylan's controversial band that went electric at Newport. He was an imporatant member of The Blues Project and the composer of Gary Lewis and The Playboys' hit, "This Diamond Ring." So, when BS&T's debut album, Child Is Father To The Man, was released in 1968 no one was surprised that, despite poor sales, it became one of the classic records of the late 60s.

Kooper's love of big band trumpeter Maynard Ferguson was the motivation behind his desire to form a rock band with a jazz aesthetic. The unit he assembled included a bunch of virtuosos and many went on to long, productive careers in the music business after their BS&T gig came to an end.

Kooper, the primary composer, lead singer, and keyboard player for the new group, brought in his former bandmate from The Blues Project, Steve Katz, as guitarist and second lead vocalist. He also added Bobby Colomby on drums and Jim Fielder on bass. The horn section consisted of Dick Halligan on trombone and Fred Lipsius on saxophone. Jerry Weiss and future jazz standout Randy Brecker played trumpets.

The hallmark of this album is its diversity. It featured everything from psychedelic rock, R&B, blues, folk, jazz, and even a classically inspired fugue for two keyboards and guitar on Randy Newman's "Just One Smile."

The record also included three other tracks written by some of the major songwriters of the day: Harry Nilsson's "Without Her," Tim Buckley's "Morning Glory," and "So Much Love/Underture" by Gerry Goffin and Carole King. The last tune closes the album with a really cool, multi-tracked, psychedelic coda that could have been inspired by The Beatles' long fade on "All You Need Is Love." All four of these songs fit well into Kooper's vision of a jazz-rock band without losing site of the original composer's intent. Buckley's contribution still sounds like a folk song, Nilsson's is still jazzy, and Goffin and King's sounds like the pop number it really is.

Lipsius stars on the sweaty, eight minute, blues workout, "Somethin' Goin' On," and the full horn section blasts away on a track that could have only been a product of the late 60s, the hilarious "House In the Country." If anything on the record was written while under the influence of illicit, mind expanding substances this song is it. "I Love You More Than You'll Ever Know" is a slow burning R& B ballad that you'll still sometimes hear on classic rock radio today. Katz's guitar is front and center.

Kooper even employs a string section dubbed the BS&T String Ensemble for "Overture" and "The Modern Adventures of Plato, Diogenes, and Freud." The latter is the weakest track on the album because the band doesn't play on it at all. It features just the ensemble and, as the title indicates, it's too pretentious for its own good. However, Kooper still gets credit for trying something completely different.

Nothing written here about Child Is Father To The Man will make you fully understand the depth and originality of the music contained on this disc without giving it a detailed listen so, if you haven't already, please consider giving it your full attention now.

The twelve tracks clock in at over forty-nine minutes, rather full for a single disc in the LP era.


Unfortunately, this first edition of Blood, Sweat, and Tears fell apart very quickly after the album was completed due to the usual reason: creative differences. Although Katz and Colomby reorganized the group without Kooper, Weiss, and Brecker, and achieved huge commercial success with their very next album featuring David Clayton-Thomas on vocals, the band would never be as dynamically creative again.