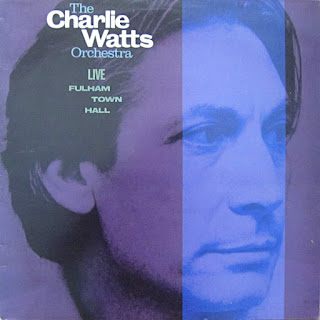 This is not going to be one of my better pieces of writing because anything I say today about Charlie Watts would just be redundant. You can already find everything you need to know about him all over the blogosphere yet I would feel remiss if I didn't acknowledge his passing in some way.
Watts was always my favorite member of The Rolling Stones and his death yesterday is one that bothers me a lot. Maybe, it's because of how iconic The Stones became during what is now the first era of classic rock.
Admittedly, I was never the band's biggest booster although I do like their music enough to have read Keith Richard's autobiography.
On the other hand, I've always been a fan of big band jazz so why I got rid of The Charlie Watts Orchestra's Live at Fulham Town Hall CD from 1986 is a mystery to me. It's out of print now and only available as a collector's item. I should've replaced it years ago.
As written over and over the last two days, jazz was always the drummer's first love though he did learn to love The Rolling Stones too. If he didn't, he wouldn't have played with them for almost sixty years.
The only original thought I've been able to come up with is that the two most important and popular rock bands of the 60s - the other being The Beatles, of course - had drummers that served the songs instead of their egos. You can read more about that on my recent assessment of Ringo Starr. It can't be a coincidence that those two bands achieved such heights with drummers who were true team players.
So, sorry Charlie, (the pun was not intended). I really don't have much else to say, just a big thank you for your great drumming over the course of many years.
Below is my favorite Rolling Stones song and the entire Fulham Town Hall album.
Classic Rock In Memoriam Jazz Rolling Stones