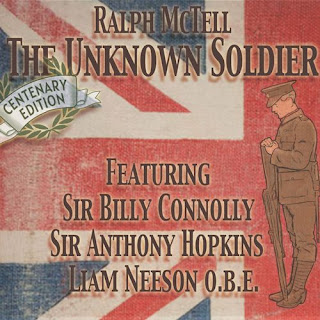 Ralph McTell has been a much beloved singer-songwriter in the UK for decades, but he is virtually unknown in America except for his outstanding "Streets of London" that he released here almost fifty years ago.
The veteran folkie and singer-songwriter with the great baritone voice had this to say to Folk Radio UK - one of Great Britain's leading music blogs - about the recent 100th anniversary of the memorial built in Ypres, Belgium that is dedicated to the missing 50,000 unknown British and commonwealth soldiers who died during what was then called The Great War: “I believe the funeral of The Unknown Soldier is one of the most profoundly moving ceremonies ever conducted. It took place in 11 / 11/ 1920 and was attended by thousands who stood in reverent silence as the coffin was paraded through the streets of London on a gun carriage, drawn by six black horses. The king walked behind the cortege, the bereaved families of those lost in the terrible carnage of WW1 had a fitting and deeply affecting acknowledgement by the state, of the sacrifice of thousands of young men whose bodies had no known graves.”
In honor of the occasion McTell composed "The Unknown Soldier: Centenary Edition," his new song that can be purchased through iTunes or through his website.
The song contains spoken word contributions from British celebrities Sir Billy Connolly, Sir Anthony Hopkins, and Liam Neeson O.B.E. The sad score is played by The Southbank Sinfonia.
According to Folk Radio, "All proceeds from sales of the single will be donated to the Royal British Legion, the country’s largest Armed Forces charity, with 235,000 members, 110,000 volunteers and a network of partners and charities; helping to give support wherever and whenever it’s needed." You can also donate directly to the Royal British Legion here.
You need to listen to this song at least twice to fully appreciate it: first by listening to it while following along with the lyrics and then by watching the official video. Both are below.
More than fifty thousand namesAre carved on Ypres' Menin gateOf soldiers who have no known gravesJust their destiny and dateWitness and last testamentName and rank and regimentIs now all that survivesFrom so many squandered livesAnd for every name inscribedThe poor bereaved were left to mournThe passing of all those who diedWith no white cross on tended lawnNo place to go to contemplateThe sacrifice this wicked wasteNo footprint left to show where once they trodAllegedly known unto godFrom Ypres Arras Aisne and SommeSix unknown soldiers were exhumedA blindfold general picked one manAnd reverently they brought him homeSix black horses drew the hearseThrough silent London crowds immersedIn deepest thought belief or wishful prayerThat it might be their own boy thereThe metal tyres on the carriage wheelsPlayed the tuneless requiemThe sky as grey as bayonet steelAbove the sombre hatless menOne more enemy to killThat remaining sense of guiltThat through it all somehow they had survivedReturned to mothers sweethearts wivesFamiliar streets their own backyardsTheir medals and all praise ignoredRelieved to be his honour guardAnd walk with him their true rewardWhile far from pomp and circumstanceAcross the autumn fields of FranceThe trenches start to slowly fill and fadeThe bloody page turned by the ploughman's bladeThankfully we'll never knowIf he was constant strong or frailScared or brave in equal partsCountry tanned or city paleA carefree youth or thoughtful ladNot wholly good or wholly badA bomb does not judge how you played your partA bullet stops a lions heartWith softest cloth and gentlest broomTo sweep and wipe cathedral dustLike dried tears from this marble tombTake care for he was one of usIn perfect irony and griefThe bride's bouquet becomes a wreathAnd wrapped beneath dark angels folded wingsTommy Atkins rests with kings.
Folk Ralph McTell Singer-Songwriters