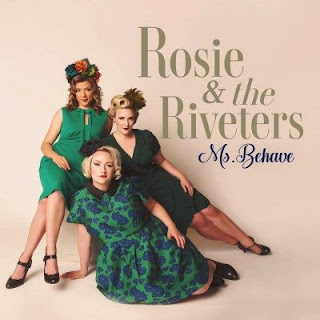 There are times when the Internet is really cool. A few weeks back while doing research for my blog post on Ashleigh Flynn & The Riveters I accidently discovered a vocal group, Rosie & the Riveters, an even better outfit of talented women with a similar name but with a unique musical perspective.
By now most people know the story of Rosie the Riveter so there is no need to go into it again here, so we'll just carry on with the music.
Ms. Behave (2018) is the singers' second album but their first as a trio - their earlier set from 2015 was released as a quartet.
Farideh Olsen, Allyson Reigh, and Alexis Normand were the Riveters and there was no one in the group named Rosie. I wrote that sentence in the past tense because Ms. Reigh unfortunately informed me that as of August of 2020 the group amicably disbanded.
The Riveters hail from Saskatchewan and their sound can best be described as a modern version of The Andrews Sisters, but don't let the perfect harmonies fool you. This is not your grandmother's girl group because there is a definite feminist outlook to most of their work. There is "Ask A Man," a song about the notion that a woman needs a man to tell her how to live and "I Wanna Get Paid" - about pay inequity, of course - plus one that is definitely inspired by the #MeToo movement with a title ("I Believe You") that says tells you exactly what it's about.
If you've ever listened to The Beatles' "Maxwell's Silver Hammer," a Paul McCartney track from Abbey Road and get the joke you'll understand what The Riveters are about. The cute Beatle's bubblegummy arrangement may fool you into thinking that "Maxwell" is more of McCartney's "granny music" (as John Lennon called it) but the lyrics are about a serial killer. The Canadian women wrote nothing that violent but the point is that if you listen to Ms. Behave superficially what you'll hear is not necessarily what you'll find when you listen intently to the lyrics.
Not every track is topical. "I Wanna Do Nothing With You" is a love song with strings.
Olsen, Reigh and Normand covered all kinds of musical ground. There is old-fashioned swing, the sound of Phil Spector's girl groups without his wall of sound, plus a little country and rock.
It's sad to hear a record as rewarding and exciting as this one while knowing there won't be any new music coming from these talented singers, composers and musicians at anytime in the future..
You can purchase the album from several outlets directly from the group's website
Folk Pop Vocals