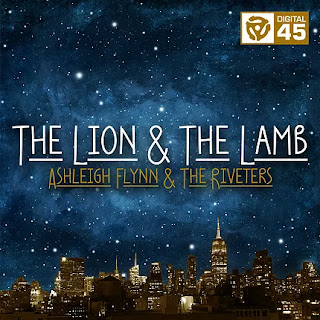 Americana rockers Ashleigh Flynn & The Riveters eponymous, debut album hit the streets in 2018 and their new digital 45, "The Lion & The Lamb" with "Six Feet Apart" as the modern day version of the b-side," is the first followup to that set of music.
Flynn has also released five albums on her own before starting this all female septet whose name honors Rosie the Riveter - the woman on the fictitious, iconic, poster from 1942 representing the American women of World War Two who worked in the war production industries because their men were fighting overseas. Some sociologists will tell you this was the beginning of the movement that allowed modern women to live on a more equal footing with their male counterparts.
The band's name should give you a strong hint about their music. It's not too aggressive yet it packs a punch that fits squarely into the Americana  or country-rock genre. I'll let you decide if the record is more rock or more country. Either way, you won't be wrong. Flynn's band rocks. It's tight, yet manages to sound free and easy.

The two tracks, both originals crediting Flynn as a cowriter, are not generic works about love and relationships. Despite the band's nod to the past, subjectwise, both songs are strictly current affairs.

Here is an explanation of the a-side directly from the group's website. "The Lion and the Lamb draws from the bible stories as an overlay for the situation we ﬁnd ourselves in today – enveloped in the COVID19 pandemic, civil unrest/peaceful protests, the rise in domestic terrorist groups in the US, the devastating impacts of climate change/ﬁres that are destroying our communities... things feel hopeless... While I am not a religious person, I am a spiritual person, and believe the goodness in the hearts of Americans translating into benevolent action is what will heal us as a nation; that "savage and cruel beasts" ﬁnd their kind and gentle nature, and work to restore the world to peace and righteousness."
About "Six Feet Apart" Flynn writes, "This song wrote itself to bring us temporary respite from our COVID19 induced isolation. We are all very grateful to be healthy and safe, and we miss playing music together... We hope this brings you a little respite too. We are all in this together."
True to these weird times, the songs were recorded on home digital work stations using iphones.
Websites:
Ashleigh Flynn
Ashleigh Flynn & The Riveters
Ashleigh_Flynn · The Lion And The Lamb
Country Rock 'n Roll