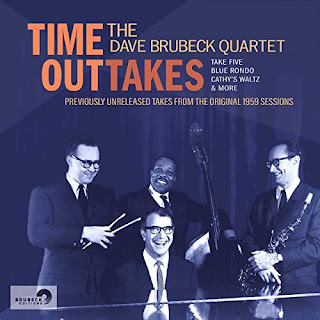 As the album cover says, Time Outtakes is a set of "previously unreleased tracks from the original 1959 sessions" by the masterful Dave Brubeck Quartet. It consists of alternate versions from one of the most deservedly loved jazz albums of all time, the original Time Out.

Brubeck (1920 - 2012) would have turned 100 late last year and these long forgotten tracks were discovered by researchers writing a book in honor of the pianist's milestone birthday.

Some of these takes are quite different form the originals. The famous "Take Five" has a faster tempo, a different drum solo from Morello on which the band leaves him totally alone, and there is a less conventional sax solo from Desmond.

Parts of "Blue Rondo A La Turk" are quite different in spots and while it may not be superior to the well know version found on the original LP it is unique and sounds quite fresh today. It's definitely worthy of your attention.

The only two charts from the original seven track set that do not have alternate versions are "Everybody's Jumpin'" and "Pick Up Sticks." Because only one take of each exists they are not included on this newly issued set. However, while searching the vaults two new tunes were discovered and added instead: "I'm In A Dancing Mood" and an informal jam session without Desmond's sax work given the title "Watusi Jam." This last one is based on an arrangement of "Watusi Drums," heard previously on Brubeck's live record, The Dave Brubeck Quartet In Europe, in 1958.

A bit of trivia: on the original album "Kathy's Waltz," named after Brubeck's daughter, is spelled with a K but on Time Outtakes it is spelled correctly with a C.

As is too often the case with the extra space on CDs, the producers filled it with some superfluous studio junk that is tacked on at the end for no real good reason. The five minutes of conversation even has a title: "Band Banter." Other than that this disc is flawless.