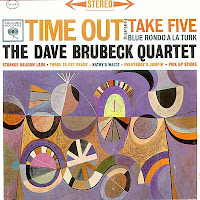 I've always liked jazz, but I'm far from an expert, which is why I seldom write about the genre sometimes known as "America's Classical Music." However, Dave Brubeck's Time Out, the first instrumental jazz album to sell one million copies, is celebrating it's fiftieth anniversary this year so it's time to take a look at one of the most famous jazz recordings of all time. Time Out is the ultimate classic by Brubeck's quartet and it's one of those rare records that have always been appreciated by both jazz aficionados and pop music fans alike.

Time Out is famous for being one of the first jazz records to employ unusual time signatures. Until this album most jazz was in either 3/4 or 4/4 time. Brubeck dared to use 5/4 and even 9/8 time signatures while offering up some of the most melodic jazz ever put on vinyl. Brubeck's piano and Paul Desmond's saxophone received most of the attention even though the rhythm section of Eugene Wright on bass and Joe Morello on drums were outstanding. Morello, especially, has never received the accolades he deserves for his unique work on this disc.

"Take Five," Desmond's only composition on the record, is the stunner and it became a huge crossover hit. It even broke ground on mainstream radio in an era of rockabilly, doo-wop, and teen idols. The LP's opener, "Blue Rondo A La Turk," with it's tempo changes and offbeat arrangement is the album's other standout track.

Why did this album and "Take Five" find their way on to the pop charts? By 1959 Elvis Presley's stock had already started to plummet, and the British invasion was still a few years away from shaking up the planet, so there wasn't a whole lot of quality pop music available. Maybe the answer is that during this dark period between two musical eras that became cultural phenomenons the public was clamoring for something more substantial and Brubeck's band simply found a way to satisfy that need.