Svetlana And The Delancey Five - A Night At The Speakeasy (2016) 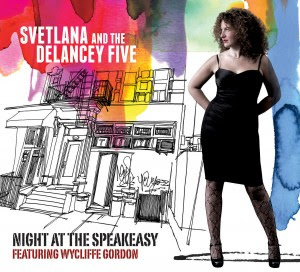 Looking through all of Bloggerhythms' posts recently I noticed how underserved women musicians are on this blog when compared to the total number of articles posted about male artists. So, to help rectify the situation just a little, November 2020 has been designated WOMEN'S MUSIC MONTH. Every Sunday this month I'll post an album or a song that features work performed by women. The reviews will cover jazz, folk, pop, rock, and even the upcoming holiday season. They will include both established artists and those new to the scene. Be sure to check them out. The first one appears today.
_________________________
Svetlana Shmulyian's second album, Night At The Movies, was released last year to positive reviews, including the one published here on Bloggerhythms. Night At The Speakeasy preceded it and was recorded with her highly talented band, The Delancey Five.

The Russian immigrant has a perfect voice for singing old style, traditional jazz and The Delancey Five also get to show off their stuff with great arrangements and solos.

Speakeasy's set list is eclectic. It offers songs that are considered standards as part of the Great American Songbook plus total reworkings of The Beatles' "Because" and The Beach Boys' "God Only Knows." Both are rock ballads that you wouldn't think transfer easily to a jazz setting. While neither one will completely win you over like the originals do because they both lack those classic bands' astonishing harmonies the singer and her band succeed in making them work.
Wycliffe Gordon employs his Louis Armstrong style vocals and assists on trombone. He duets with Svetlana on "You Won't Be Satisfied" and "Under A Blanket Of Blue." The swing era is well represented too by Duke Ellington's "Do Nothing 'Till You Here From Me" and Benny Goodman's "Sometimes I'm Happy (Sometimes I'm Blue)."
Svetlana also brought two of her own songs to the studio, "Temptation" and "All I Want."
If you're looking for straight ahead jazz with no gimmicks, great singing and playing - along with a little bit of fun - you need to listen to Night At The Speakeasy.
Take a peak at Svetlana's website for more.
Jazz Vocals Svetlana