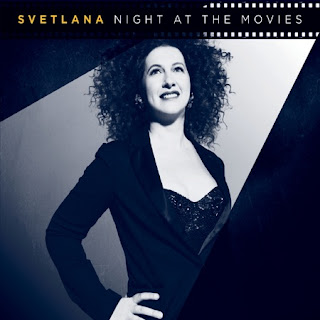 Russian immigrant Svetlana is in love with both American cinema and music and she proves it with her second full length album, the recently released Night At The Movies. All fourteen songs are Oscar winners and all are performed in the style of classic, vocal jazz.

According to her website Svetlana is "Russian-by-birth American-by-Music" and it was the latter that sent her to New York City to start a new life and career about twenty years ago.

Just like another non-American, Michael Bublé, Svetlana has fully embraced the Great American Songbook and added the right amount of a modern sensibilities. However, she is more thoroughly schooled in jazz than the Canadian Superstar.

The new album features a tight band but it is not The Delancey Five, the quintet Svetlana is credited with on her debut set, Night At The Speakeasy (2016). However, the group she assembled for Movies can number up to thirteen depending on the track and they are not merely accompanists. The singer's vocals are more in the pocket because of this hot outfit.

There are lots of old tunes, including "Smile" from Charlie Chaplin's Modern Times, "Cheek to Cheek" from Fred Astaire's 1935 flick, Top Hat, "When You Wish Upon a Star" from Pinocchio, and the album's finale, "Somewhere over the Rainbow." The last one is well done but nobody should ever be allowed to sing this great ballad except for Judy Garland.

The rest of the songs are from films released after 1960 and one, "Remember Me," is from 2017's Coco. Wycliffe Gordon duets with Svetlana again on this record, assisting her greatly on "Cheek to Cheek" and Pharrell Williams' "Happy" from Despicable Me 2. The duo may not be Ella and Louis but their pairing is quite satisfying. One can see them working together for many years without disappointing listeners. Also helping out are two other male singers, Rob Garcia, and Jon-Erik Kellso.

The producer is Grammy nominated Matt Pierson who worked with Jane Monheit, Joshua Redman and many others.