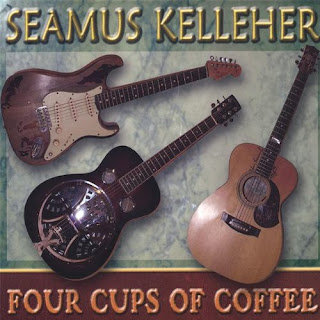 Due to all of the bad news of the last two years the sad events of September 11, 2001 may have receded deep into the recesses of a lot of people's minds. But, on this twentieth anniversary of the World Trade Center and Pentagon disasters, and the heroics of the passengers on United 93, I believe it's time to discuss one of the saddest songs you'll ever hear.

Seamus Kelleher was known around the Philadelphia area as an excellent rock guitarist when he was a member of the now disbanded, locally popular, Celtic-rock quintet, Blackthorn. He left the band in 2011 to pursue his own muse and released two solo albums, both of them favorably reviewed here.

Kelleher is quite eclectic. He's versatile on both acoustic and electric guitars. Not only can he play the the hard driving blues-rock of Rory Gallagher, he also covers slide guitarist Elmore James. On his second album, Another Side of Town, he gets mellow and topical with "Streets of London," a folk song by English singer-songwriter Ralph McTell. He also writes a lot of his own tunes. One of them is "September Skies."

"September Skies," is a truly wonderful work from Kelleher's first solo outing, Four Cups of Coffee. Even though it's about the events of 9/11 it's not political at all so the song should strongly resonate with anyone who lived through that nightmarish Tuesday.
At the time, Kelleher lived in Northern New Jersey and his town, Cranford, lost six people when the Twin Towers were destroyed. Due to the the ensuing chaos, many people who were in lower Manhattan at the time were unable to contact their loved ones at home, so it wasn't known if they survived. According to the song, the abandoned cars parked at the local train station were the only way many of the townspeople discovered what friends, neighbors and family members would never be returning home. That is the song's sad story.
Kelleher was teaching classes at NYU at the time of the tragedy. He told irishphiladelphia.com that "My wife and I worked in the World Trade Center back in the late 90s and we knew every inch of the towers. We knew some of the people who were killed there, six from our home town. My neighbor across the street just got out of the towers before they fell. He said to me, 'Seamus, I've seen things today no man should.'"
There are two versions of "September Skies" below. The first one is from the last Blackthorn album, Push & Pull, from 2006 and the second one was released a year later on Kelleher's first solo disc.