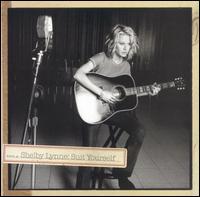 I became a Shelby Lynne fan when I heard her great turn of the century CD, I Am Shelby Lynne. It was the one where she took control of her own career so she could make music her way. It also began her transition away from being a pure country singer and into a singer-songwriter where her country roots were liberally interspersed with R&B, delta blues, and even some rock and roll. That album remains her classic and catapulted her career into a very special realm.

Lynne's followup, 2001's Love, Shelby, was a step backward but happily, she redeemed herself two years later with Indentity Crisis, and Suit Yourself in 2005.

Suit Yourself is much looser than most of Lynne's previous work. It often feels like we're sitting in on recording session rehearsals because snippets of conversations and false starts are left uncut on a few of the tracks. Some of the songs were demos she recorded at home and brought into the studio to finish. The rest are full band arrangements recorded in Nashville.

The record's highlight is "When Johnny Met June," a sad but affectionate tribute to Johnny and June Carter Cash.

Benmont Tench, formerly of Tom Petty's Heartbreakers starred on keyboards. His organ is the instrumental highlight of "You Don't Have A Heart." Tench also adds some nice pedal steel and mandolin to the set.

Lynne is a very expressive singer who always performs her work sans melodrama because she always has something to say. Shelby Lynne is your kind of singer-songwriter if you're tired of today's slick radio fodder that calls itself "country" as long as you speak "Southern" and wear a cowboy hat.