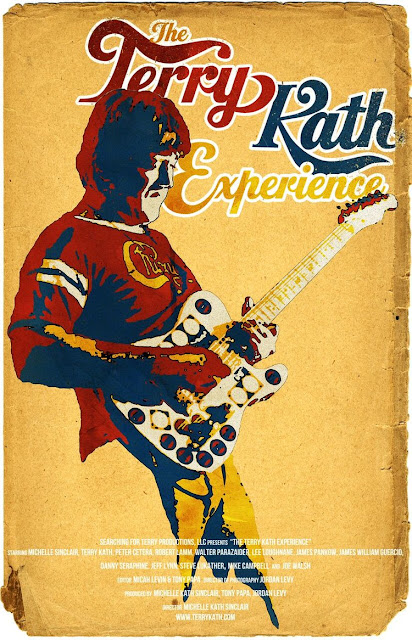 A surprisingly good documentary, The Terry Kath Experience, received rave reviews at the Toronto International Film Festival in 2017 and is now available on AXS TV, a cable network that specializes in classic rock programming.

Kath was the guitar player for the 70s horn band, Chicago, an outfit that was finally inducted into the Rock n' Roll Hall of Fame in 2016.

Michelle Kath Sinclair was only two years old when her father died accidentally playing with a gun he didn't know was loaded at age thirty-two. Sinclair never knew Kath because she was so young when he died so, in order to fill a big void in her life, she produced this informative and moving documentary.

Before we get deeper into the film some of you fine readers may need to know more about Kath because, except for musicians and many diehard fans, he is not among the more well-remembered classic rockers. Although he unjustly never makes the lists of rock's great guitarists that many music magazines and websites love to compile he was held in high esteem by such axemasters as Jimi Hendrix, Joe Walsh, Eric Clapton, and all six of his original bandmates. They agree that Kath was indispensable to their success and that he was the heart and soul of the jazz-rock septet. They even considered breaking up after his passing because everyone knew the group would never be the same and, unfortunately, they were right.

Sinclair also interviewed James William Guercio, Chicago's first producer. He was the owner of the Caribou Ranch where Chicago recorded five studio albums from 1973 to 1977. For many of us it was the first time we saw the ranch and studio where the band recorded so many of their big hits.

One of the main themes running through the documentary is Sinclair's search for Kath's favorite onstage shredding device, his Fender Telecaster with pignose stickers pasted all over its body. You'll have to watch the movie to see if she finds it.

The film proves itself to be part Ken Burns because of all the informative movie clips, still photos, and talking heads collected together and, mostly because of the melodramatic search for the missing Telecaster, it's also part reality show. Sinclair did a terrific job of informing viewers of who Kath was, how much his music meant to him, his unfulfilled plans for the future, and most importantly, how highly his friends and family thought of him above and beyond his musical talents.

It's sad that Kath is gone but Sinclair puts so much love and detail into her movie that when it's over we leave it happily remembering the man who treated us to some of the finest rock music ever made. We're also glad to witness his daughter seemingly come to terms with her father's legacy.

Sinclair has succeeded in the entertainment field in multiple ways. Working under the name of DJ Lady Sinclair she is a DJ known for her party mixes. The Terry Kath Experience is her first feature length documentary and she receives credit as both a director and producer. She also has her own podcast.

The first video below features the man himself singing lead on his first composition to make it onto a Chicago LP. Side 1, track 1, of Chicago Transit Authority, the group's very first album from 1969, is "Introduction." It's one of Kath's best.