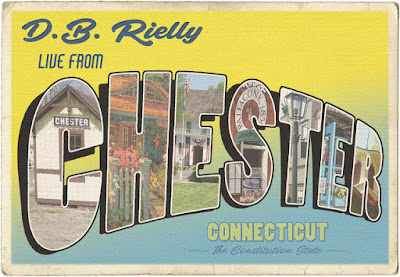 While not quite as compelling as last year's Live From Long Island City D. B. Rielly's Live From Chester is a very good followup and companion piece to its predecessor.

Rielly is one of the few musicians who is more effective with just his voice and a guitar or banjo than with a full band. For someone like me who often finds solo, acoustc performances on the dull side that is saying a great deal. He allows no distractions in this sparse setting so you get to know the very personable artist as he makes his songs the stars of the show.

"Your Stupid Face," "I'm Your Man," "Your Doggin' Fool," and Don't Think So Much," show off Rielly's pleasingly warped sense of humor but his serious side quickly indicates he is not a novelty act. He proves it with "The Sea" and an encore of "I'll Remind You Everyday," his Alzheimer's love song.

"My Ma" is almost a word for word retelling of his spoken intro to the last song and it's virtually an identical performance to the one on Long Island City. There are only two other tracks from Rielly's earlier studio albums so this makes most of his second live set a fresh listening experience.

Live From Chester is very short. It's less than thirty minutes long and that includes the singer-songwriter's between song banter and storytelling. You'll definitely want to hear more when it's over because a little bit of Rielly just isn't enough.

Please give this deserving artist a serious listen because his warmth makes you feel as if you are in the same room with him instead of listening in your car, your home, or on a cheap pair of speakers.

All of Rielly's music can be purchased directly from his website or you can buy and listen to it below at CD Baby.