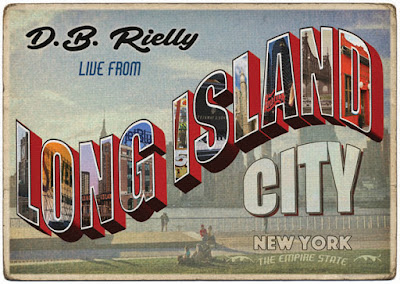 One of the benefits of running a music blog is that I've been exposed to artists that I would not normally get to hear otherwise and New York City's D. B. Rielly is one of them. The praise given here previously to Rielly's first two studio CDs was genuine which is why I was more than pleased at his invitation to listen to D. B. Rielly Live From Long Island City.

All three of the singer-songwriter's discs are uniquely packaged. They come in unusual shapes, sizes, and construction materials. The earlier ones were tin and wood and Long Island City comes in the shape of a large, cardboard postcard. Unfortunately, none of them are able to be filed with the rest of my CDs. Perhaps Rielly wanted to make sure his work had its own special place in my collection. Well D. B., if you're reading this, it worked. I've got your stuff stored in my stereo cabinet where I see it more often than my other discs so, guess what, they actually get played.

Both of Rielly's studio albums were full length discs using a band which makes this one, a solo, acoustic, live performance a big surprise. It's very brief and clocks in at just over twenty-four minutes and that includes three tracks of between song storytelling with his tuned in audience.

Of the seven actual songs there is only one Rielly recorded before, "Don't Give Up On Me" from his debut CD, Love Potions and Snake Oil. The rest are heard here for the first time and for that he is to be congratulated. Too many live albums are just rehash and serve as nothing more than a contractual obligation from an artist to his record company.

Rielly chose this format because he wanted to emphasize the songwriting and I don't blame him. His craft has matured to the point where these songs don't need anything else but his voice and a guitar and on one track, "I Believe, Angeline" he plays banjo. He shows off his fantastic and slightly bent sense of humor as well as a sad and ultra-serious side. 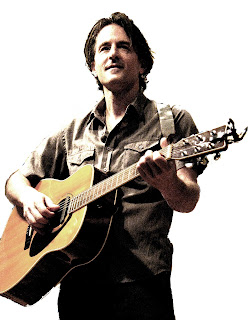 Highlights include "Nothing Like You" a tune that lists dozens of things the singer has witnessed during his lifetime but he tells the song's subject that he or she is the most unbelievable person he has ever witnessed. Rielly sings, "I thought I've seen everything there was to see but I never seen nothin' like you."

Rielly has a thing about addictive, non-stop, cellphone usage and is hurt that every time he wants to say those three little words to his girlfriend she answers her phone as soon as it rings. So, on "Let It Ring," he pontificates, "It ain't nothin' but a thing. Let the voice mail get it just this once honey, won't you let it ring." He's a man after my own heart.

On "Prenup" he tells his soon to be wife, "I trust you with my heart but not my stuff."

Rielly closes out the show with "I'll Remind You Everyday." In an email discussion with Bloggerhythms he talks about this very sad but beautiful song. He describes it as an Alzheimer's love song. The protagonist "goes through his & his wife's life together - reminding her and hoping to spark her memory - for any and every reason... to bring back to her some of the joys in her life, to entertain the woman he loves with her own stories, and maybe to snap her back into the present and be with him for a moment to rescue him from his own loneliness (since her mind is so infrequently present)."

The singer-songwriter continued, "The verses go from the beginning of their lives to the end so the last verse brings us to present day. He talks to his wife like she has come out of her Alzheimer's for a moment (as the disease progresses, the memory fades out more frequently and for longer periods but can still come back momentarily) and explains to his long life partner what is happening to her, and to them and most likely, even when her mind doesn't come back, he says this to her anyway, because of his complete love for her - and to remind himself why he's there for her every day."

Both Rielly's voice and songwriting should remind the listener of John Prine and that is always a good thing. "I'll Remind You Everyday" conjures up many of the same images and feelings about the fate and loneliness of old folks as well as Prine's great "Hello In There" does so easily.

Rielly deserves fame and fortune. It's a very sad state of affairs that in today's music world that there is almost no chance of that happening.

You can sample every song on the album on the artist's website.
D. B. Rielly Folk Singer-Songwriters