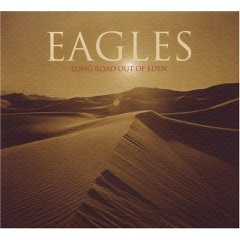 Long Road Out Of Eden made me realize just how much I missed the Eagles. Throughout the 70s my favorite Eagle, Glen Frey, his sparring partner and friend Don Henley, and all of their various band mates, created a classic sound that with the exception of their last full length studio album, The Long Run, never wore out its welcome.

Readers of this article will have to understand that I came to this new double disc CD expecting to like it and I'm happy to report that I was not disappointed. The Eagles vocal harmonies are perfect as usual and so is their classic 70s sound that was loved by so many of us. They are still one of the few rock bands who can do ballads without sounding sappy.

Long Road Out Of Eden's back story has been chronicled in many news publications around the world. The Eagles have sold millions of copies of the CD largely because of their exclusive deal with Walmart that succeeded despite heavy criticism that the band sold their souls to the devil. It's a sentiment I agree with completely. Henley, especially, comes off as a hypocrite because he sings about our "soul-sucking" culture on "Business As Usual" knowing full well he was selling his music through a retailer who has a reputation for sucking the souls out of their poor employees. Henley has always been the Eagles social conscience and that is what makes the Walmart deal so disconcerting.

However, once you get by the moral contradictions and actually delve into Henley's songs you will notice that he makes many valid points. Those of you who know where the Garden of Eden was supposed to be located will appreciate the title track's name as a thinly veiled disguise for his views on ending the war in Iraq. He is ticked off and he wants the whole world to know it.

There are many highlights. The acappella "No More Walks In The Wood" opens the album and conjures up visions of "Seven Bridges Road." The made for radio "How Long" sounds like classic early Eagles. There are smooth ballads such as "I Love To Watch A Woman Dance" and the melodically entrancing "What Do I Do With My Heart" that harkens back to the grand tradition of "Best Of My Love." "Waiting In the Weeds" shows Henley's softer side. Frey's pleasant instrumental with the forward looking title of "I Dreamed There Was No War" is especially sad following on the heels of the angry title track. There is much, much, more.

As usual both Henley and Frey are the dominant personalities but it is still surprising to see Timothy B. Schmidt and Joe Walsh, stars in their own right, willing to accept such a low profile even though their contributions helped make the album a success. Schmidt's fine lead and harmony vocals and Walsh's distinctive guitar color the arrangements nicely.

Listeners who automatically assume that a band's new songs are "not as good as the old stuff" need to think again and spend the necessary time it takes to fully digest this CD. I guarantee you will come away thinking that the Eagles should not have taken twenty-nine years off between studio albums.

In addition to Walmart the CD is also available through Amazon.