Gil Scott Heron - The Revolution Will Not Be Televised (1970) 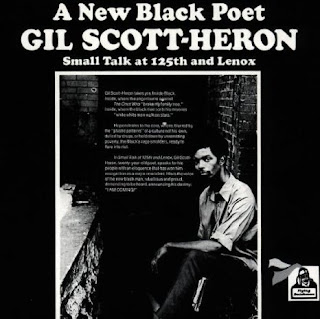 Not long ago Bloggerhythms went on a tirade about Dr. Dre's soundtrack to the film Straight Out Of Compton. You can read my harsh words here if you so desire.

My opinion of the album's lyrics and of rap music in general remain unchanged. However, I do believe there are excellent spoken word recordings made by musicians of substance. Perhaps the most noteworthy example, one that's almost too easy to embrace, is the work of the late R&B and jazz musician Gil Scott-Heron.

Scott-Heron's most famous song/poem is "The Revolution Will Not Be Televised." It's a spoken word treatise that could be considered a political diatribe by some. He first recorded it for his 1970 debut album Small Talk at 125th and Lenox, a whole record of such fare on which he performs in a live setting with only bongos and congas as accompaniment.

The following year the musician re-recorded "Revolution" again with a full band for his more musical album, Pieces Of A Man. This superior, later version also became the B-side of his first single, "Home Is Where the Hatred Is."

The words to "Revolution" are very cynical thoughts about how the media obsesses over things that are not important just to earn ratings and, because they do, it was Scott-Heron's belief that the impending revolution will not enter the consciousness of the average American. (Things haven't really changed since 1970, have they?) Most of the song's cultural references are very dated so young people may not fully comprehend everything the man is discussing but baby boomers should completely understand. It would be interesting to hear how an updated version would be received today.

This cult classic pre-dates rap and hip-hop by a few years but Scott-Heron became highly influential to the creators of the genre.

You can hear both versions of "Revolution" below. Warning: the lyrics are a bit rough and provactive but they're not disgusting, elevated of course by the subject matter and Scott-Heron's obvious intelligence behind them.