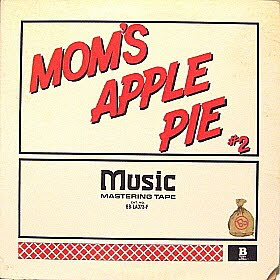 The ten piece horn-rock ensemble, Mom's Apple Pie, is remembered by record collectors more for the famously obscene cover from their first LP (1972) than they are for their music.  Let me be as delicate as possible. The artwork featuring the sexually explicit, steaming apple pie "Mom" is holding can be seen on the group's Wikipedia page and elsewhere on the Internet.  The cover of the Ohio band's second album (1973), shown here, is far more tame and mundane.

Horn bands were still all the rage in '72 and Mom's Apple Pie tried very hard to cash in. The large outfit started making some noise and they were eventually able to open for big names such as The Doobie Brothers and David Bowie. They were signed to the late Terry Knight's record company, Brown Bag Records. Knight was best known for previously producing Grand Funk Railroad and Bloodrock.

The horns usually played only as a unit and hardly ever took a solo.  Their two lead singers, Tony Gigliotti and Bob Fiorino, were similarly styled, full-voiced tenors and they sounded as if the vocal trio from Three Dog Night were fronting Chicago.  Their songs were mostly self-written and revealed some obvious talent even though their lyrics weren't particularly deep and their arrangements lacked the adventurousness of the highly successful Windy City septet. An even better comparison might be Lighthouse ("One Fine Morning" and "Pretty Lady").  If you're familiar with them you'll understand Mom's Apple Pie.

I’ve owned Mom’s Apple Pie 2 since it's release but I probably haven't given it a spin in over thirty years so, while looking for inspiration for today's post, I pulled it out for a listen. The platter sounds exactly how I remembered it: pleasant, if not arty, and too middle-of the-road to be engulfed by the controversy over the cover. The music press wrote far more about that scandalous pie than they ever did about the notes that sprang from the grooves of the record so, unfortunately, the cover became an albatross that contributed heavily to their becoming a lost band of the classic rock era.