Last week, in part one, I published nine of my all time top ten guilty pleasures with a statement that my number one choice would be receiving its own separate post. May rock n' roll fans everywhere forgive me. 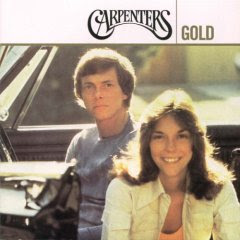 One of the Twentieth Century’s most beautiful female singing voices belonged to the late, golden-voiced, balladeer Karen Carpenter. She was the more famous half of The Carpenters, the brother and sister duo who had a huge string of hit singles from the late 60s through the mid-70s.

Many of us know the sad story of the devastating eating disorder that took Karen's life in February 1983 but this essay is not about anything the supermarket tabloids consider important. It's only about her music.

Let me start out by saying that I was not a fan of the Carpenters when they hit the big time. I was a teenager when "Close To You" made the siblings stars. The unfortunate timing of their initial stardom subjected them to even more ridicule than artists of their ilk normally received. Syrupy love ballads and kids songs sung by young adults with squeaky clean images were not held in high esteem by teenage boys in 1970 and I made fun of them every chance I could. It was the summer after Woodstock and Karen and Richard were almost the anti-Christ to fans of rock n' roll. Even the All Music Guide, the famous online music review site with a very open mind, wrote the following about their 1973 follow-up album to the previous year's excellent A Song For You, "Whatever the reason, from the moment of the release of Now & Then, anyone under 30 buying a Carpenters album would have good reason to go to a neighborhood where no one knew them to make the purchase, and hide it from their friends."

The Carpenters image grated on their detractors just as much as their music did. Two early and abysmal cover versions of Beatles songs, "Ticket To Ride" and "Help," and their giant hit single "Sing," a song from Sesame Street, cemented their reputation.

Karen was not just a singer. Many people still don't know that she was a highly skilled drummer who played on many of her own records. Modern Drummer magazine even praised her work. However, as her career progressed she played the drums less and less to concentrate on her vocals.

Did Carpenter waste her natural gift? When she sang more intelligent music, much of it from A Song For You, the answer is no. Then she was absolutely sensational. Listen to that album's title cut, and "Masquerade," from Now & Then, and you wonder what she could have accomplished if she had chosen to be a jazz singer. Listen to the duo's more hip songs, most notably "Goodbye To Love" from A Song For You, where elements of rock n' roll actually wandered into the arrangement, and "Superstar," a song from an earlier album about a groupie who falls in love with a rock star, and you know for sure that singing children's songs should be left for people like Raffi and Sharon, Lois, and Bram.

I love Karen Carpenter's voice. I always have, yet music lovers the world over were short-changed because she didn't use it to produce work that would have rewarded her with the respect her natural talent should have demanded.

Finally, here are two other blogs who have recently posted their own favorite guilty pleasures.
The Review Revue
Layla's Classic Rock Faves