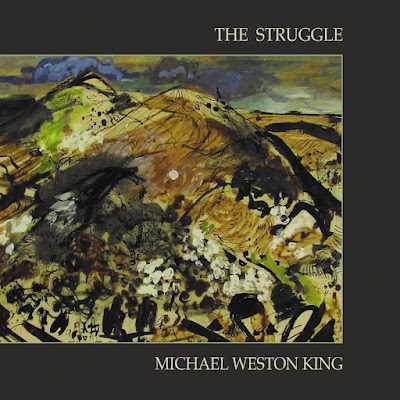 A few months ago I wrote about the most recent album by the highly regarded country duo of Michael Weston King and his wife, Lou Dalgleish, of Birmingham, UK. Together, they're known as My Darling Clementine. That CD, Country Darkness, is a thirteen song tribute to tribute to Elvis Costello.
King is a busy man these days because in addition to his day job he recently released his fifth career solo record.  It's his first one in ten years. (Dalgleish lends vocal support on one track.)
The album, The Struggle, is a lot more folk than country, but elements of both are readily apparent throughout the set.
The Struggle is actually named for a hill trail in England's Lake District, but given the serious lyrical content of the songs it could also be describing the singer-songwriter's view of the world. An indication of that is King credits Dalgleish in the CD's liner notes as being "the strength in my struggle."

On "Weight of the World" King opens the CD with not so subtle references about the cult of Donald Trump, the George Floyd affair and waving a Bible in front of a Washington D. C. church while singing the role of a policeman who reluctantly voted for the former president. "I put a cross beside the name/ I thought that it would be a change for good / The boys down at the station all convinced me though I never really understood / But I saw them on the news the other night / And I clearly understand it’s not right to hold a man down, while he begs for his life."

Jeb Loy Nichols supplied additional vocals on the track and the album closes with a second take of the song sub-titled "Ghostwriter Remix" that includes distracting, real, broadcast news coverage. This version is unnecessary because the first one is perfect.

Even though I agree with every sentiment in this outstanding song I felt a little insulted when I first heard it because King is an Englishman criticizing recent events in America. My thoughts were, "Why not clean up your own house?" Despite that, I knew it was a perceptive piece of work and I quickly overcame my feelings about it. It's the best song on this totally worthwhile album.

The video for "Weight of the World" is below but King must have felt that it was too powerful for both children and some week-willed adults, so to view the highly politically charged YouTube production you'll need to log in with a user name and password. For me, my Google account worked well.

"Sugar" is a double entendre. The clever lyrics can be taken either as a song about addiction or a woman named Sugar. King appears to tell us that loving someone too much can be as bad as a dependence on a horribly illicit substance. "They say that you’re bad for me / And yes I know that’s true / You’re not the only thing I want / But you’re the one that gets me through.”

"Valerie's Coming Home" discusses packing up the routine personal belongings of Dalgleish's mother after moving her into a home for the aged and reaching the end of her life as a resident there. “They packed away her cards and letters / Folded up her favourite sweaters / Handed you her wedding band that had not been off in 50 years / Took down all the photographs / Snapshot moments from the past / Boxed up all her memories and faded souvenirs."

These songs are just the tip of the iceberg. There is so much more. King shows that he is a songwriter above all else and that he is fully aware of the world around him. Like John Prine, he writes touching stories and character studies. He's also introspective like Jackson Browne and not afraid to get personal. Both of these composing styles are in abundance on The Struggle.

As good as the couple's Costello album is King's latest solo work is even more impactful. His melodies are pleasing and the production is restrained. His songs are never overwhelmed by his sidemen whose subtle work enhances every arrangement. The Struggle is an album that should be considered one of the elite singer-songwriter records of the still relatively young 21st century.