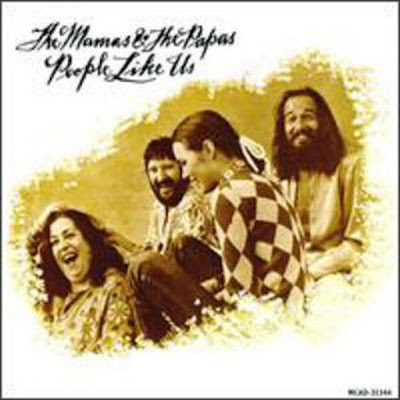 It's hard to top the beautiful harmonies given to us by Michelle Phillips, Mama Cass Elliott, Denny Doherty, and vocal arranger and composer, Papa John Phillips - four singers known to the world in the second half of the 1960s as The Mamas & The Papas. Almost sixty years later many of the quartet's songs are indelibly etched into our brains, and is there anyone who doesn't love "California Dreamin'?"

All of that said, People Like Us is an album that probably never should have been made. It was recorded in 1971 by the group only to fulfill a contractual obligation to their record company - ABC Dunhill - after they split up late in 1968.

After The Mamas & The Papas went their separate ways their label discovered they were contractually obligated to release one more album. If they didn't comply each member could have been sued $250,000 for breach of contract.

Years later - in the liner notes for a Mamas & Papas compilation CD - Michelle Phillips said that People Like Us "sounded like what it was, four people trying to avoid a lawsuit." She isn't wrong, and that is readily apparent everywhere on their only album that was entirely self written - mostly by Papa John Phillips, of course. Reworking other artists' songs was always a Phillips strong point. "Dedicated to the One I Love," "I Call Your Name," "Dream A Little Dream of Me," "Dancing in the Street," and "Spanish Harlem" were proof the quartet had exquisite taste in cover songs. They could have used a few here.

The album's only single, "Step Out" is - for lack of a more descriptive word - boring. It doesn't have the joyous harmonies and the unique instrumental support that was always an important part of The Mamas & The Papas' best work. It only reached #81 on the Billboard Hot 100 even though it did better on the Adult Contemporary chart, climbing to #25. The album itself only got to #84. It was their only LP not to reach the top twenty.

The title track would have made a better single and "Shooting Star" is also worthy. The rest of the album sounds like filler, even "Pearl" - a well-intentioned tribute to Janis Joplin.

Due to unexpected health considerations Elliot did not play a prominent role in recording these twelve songs. While listeners can hear that she fully participated in the sessions most of the female lead vocals were handled by Michelle Phillips who just doesn't have the superlative vocal chops the very talented, late star possessed.

The four singers seldom recorded as a unit while working on People Like Us. The sessions took a long time to complete because each member came into the studio to record many of their parts separately for overdubbing later. Sadly, these four beautiful voices never blended together again.

There are many notable final albums, but People Like Us isn't one of them.

Last Albums discusses music that was recorded as new material and intended to be released to the public as a complete album but not necessarily the last one. Live albums, greatest hits or "best of" collections and compilations do not count, nor do posthumous releases of leftover tracks cobbled together to make a final album.