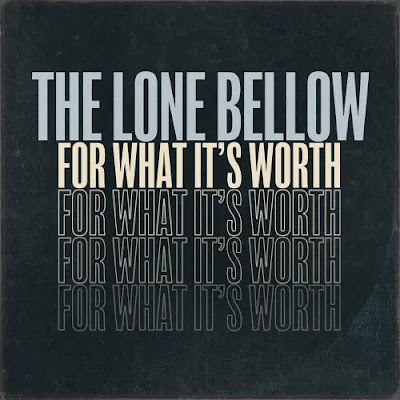 I've seen The Lone Bellow - Brian Elmquist, Zach Williams and Kanene Donehey Pipkin - in concert twice and they've delivered wholly satisfying performances each time. Their four albums, EP, and a handful of one-off singles are the epitome of the acoustic-rock sub-genre spearheaded over the last decade or so by more popular bands such as Mumford & Sons and The Lumineers. One of those singles is a remake of Buffalo Springfield's 1967 hit "For What It's Worth," released on iTunes and Apple Music in 2018.
The Stephen Stills penned song was not exactly a loud burst of hard rock when it was released back in the day, and The Lone Bellow's ultra-mellow take of the classic song is even more laid back than the original.
I'm probably not the only music lover who mistakenly believed that "For What It's Worth" is an anti-Viet Nam War song. Instead, Stills wrote what is perhaps his most famous single about an incident in 1966 that was much less altruistic than wanting to end a long war. Young people attending the music venues and clubs on Sunset Strip in Los Angeles were causing a lot of traffic problems late at night. The local residents and businesses complained, so the city imposed a 10 PM curfew. Peaceful protests against the curfew turned into riots on November 12, 1966 when the club goers considered the anti-loitering laws and the strict regulations a violation of their civil rights. I must admit that discovering the true meaning of "For What It's Worth" removes a lot of the luster from Buffalo Springfield's #7 hit record. Even so, it's still a good song, and The Lone Bellow did a very nice job covering it.
The Brooklyn band's studio recording was once featured on James Spader's hit TV drama, The Blacklist.
The videos below are live takes - but excellent nonetheless. The first is from WNRN, listener supported radio in Charlottesville, VA. The second one was filmed in Rocky Mountain National Park for One Campaign, an international organization devoted to ridding the world of extreme poverty.
Great Cover Versions Lone Bellow Rock 'n Roll