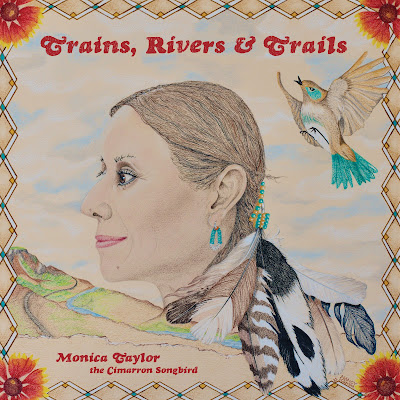 When it was suggested to me that I listen to Oklahoma's Monica Taylor I immediately became interested mostly because the late, great, Jimmy Lafave - a beloved singer-songwriter who was also originally from the Sooner State - was a big fan.
Lafave dubbed Taylor the Cimarron Songbird because she lives near the Cimarron River. It's a nickname she apparently relishes because she uses it on the colorful cover of her latest solo album, Trains, Rivers & Trails.
I've written here before that much of today's country music is rock and roll played mostly by people who speak Southern and wear cowboy hats, but Taylor sees to it that on her new album you'll be listening to the real thing. There is electric guitar - of course - but the eleven song set is loaded with banjos, dobros and mandolins. Old time country music fans will love this record because it sounds like the kind of music played in the Shenandoah Mountains of West Virginia or at Dolly Parton's Tennessee mountain home.
Taylor has made nine albums, but Trains, Rivers & Trails is only her third solo release. She recorded three albums as part of a duo called The Farm Couple with longtime collaborator, Patrick Williams and three more as a member of an all female trio, The Cherokee Maidens, that includes Robin Macy, the original lead singer of the pre-stardom Dixie Chicks. Their website accurately describes the Maidens as a cross between Bob Wills and The Andrews Sisters.
Since 1998 Taylor has performed at the Woody Guthrie Folk Festival. She has also worked with Garrison Keillor on the Prairie Home Companion and shared a stage with The Nitty Gritty Dirt Band and Ellis Paul among others.
Taylor is a pure country girl who sings about what she knows. Her heritage is Cherokee and Scottish, and she embraces both cultures in her music. She tells stories about Oklahoma's red dirt roads, home, fence posts, and there are train songs on all of her albums. A fan wanted her to make a whole album about trains but this record is the closest she has come. On the opening track, "The Sound of a Train," Taylor sings, "Your memory’s like the sound of a train, In the middle of the night." 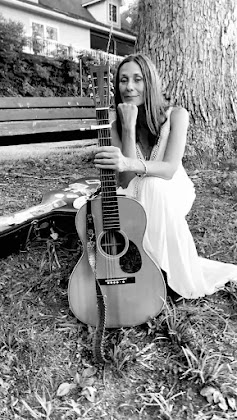 Many of this talented country singer-songwriter's songs tackle serious concerns. “Salty Tears” is about America's treatment of Native Americans in the early 1800s. “Almost all of the  tribes on this continent were being herded to Indian territory (now Oklahoma) at that time. They each had their Trails of Tears. The song is about my own great great grandmother who was 13 years old when she, along with her mother, father, sisters and brothers, walked that trail together. Her parents and sisters died along the cold trail. This is her story.”
Taylor allows space for great songs written by other artists. She included impeccable cover versions of John Hartford's "Gentle On My Mind" - a huge hit for Glen Campbell - and "The Ballad of Easy Rider," a Roger McGuinn composition written for The Byrds. She also recorded "Minor Key" with lyrics by Woody Guthrie and music by Billy Bragg and Wilco.
The proud Oklahoman closed the eleven song set with "Ocoee Love Song," a love song that possesses a Civil War theme. She wrote about the women left behind during the war and how their strength held families and society together while their men were away fighting.” In the chorus she sings, "Just a girl when you left me/But a woman is now what you see."
Listen to the first first single from the album, "Train, Take Me Away." Taylor says it's a "homage to my older family members who took to the trains during the Great Depression to find work… and the coming home, not ever wanting to leave home again."
Country Monica Taylor