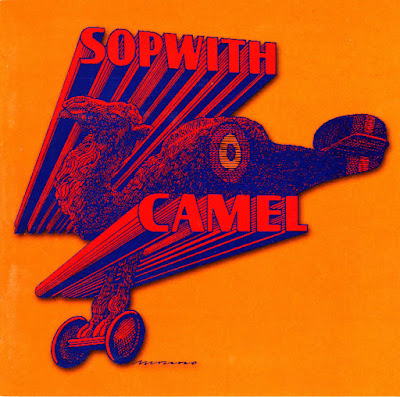 A recent article on a hippie era band from Philadelphia, The Mandrake Memorial, was recently published on The College Crowd Digs Me, a very fine music blog I read regularly. It's my inspiration for this post about Sopwith Camel, another forgotten group from relatively the same time period.
I found Sopwith Camel's eponymous LP decades ago in a bargain bin, and I don't know why I bought it because I didn't know who they were. Perhaps I was intrigued by their name and the album's cover art. Making a purchase that way is usually a mistake, but this time my instincts were rewarded with some pleasant tunes.
The quintet was the first San Francisco band signed during the flower power days to have a top 40 hit. "Hello Hello" (1967) climbed to #26 on the Hot 100. The follow-up single, "Postcard from Jamaica" only made it to #88, and that was it for the band. After an unsuccessful attempt at recording a sophomore LP they disbanded before the end of the year, making this their only album release of the 1960s.

Sopwith Camel's name originated with founding member Peter Kraemer. The band got together in 1965 with Kraemer as its vocalist and saxophone player. The lineup included guitarists Terry MacNeil and William "Truckaway" Sievers. It was rounded out by the rhythm section of bassist Martin Beard and drummer Norman Mayell. Beard and Mayell later turned up on Norman Greenbaum's Spirit In the Sky LP and the drummer eventually joined the acid rock trio, Blue Cheer.

The eleven song record was produced by Erik Jacobson who also helmed sessions for the great New York folk-rockers, The Lovin' Spoonful - and later Tim Hardin and Chris Isaak - which is perhaps why this LP often sounds like John Sebastian's hall of fame outfit.

"Hello Hello" - one of several tracks composed by Kraemer and MacNeil - is particularly reminiscent of the Spoonful's earlier, eccentric little ditty, "Did You Ever Have To Make Up Your Mind?" With it's vaudeville arrangement and lyrics such as "Hello, hello. I like your smile. Hello hello, Shall we talk awhile? Would you like some of my tangerine? I know I'll never treat you mean" the 45 RPM could be criticized for being too cute. On the other hand, the quintet went full blown psychedelia on "Cellophane Woman" - a song written by guitarist Sievers - that is loaded with the typical, spaced out, electric, lead guitar work of the time.

In 1972 Sopwith Camel re-formed without Sievers to record The Miraculous Hump Returns from the Moon. This effort was rewarded with some good reviews but little sales and the band broke up again in 1974.

Kraemer, MacNeil and Beard got together again in the 21st Century with two replacements. Unfortunately, Beard died in 2015. You can read more about Sopwith Camel's recent history at their website that currently does not show any additional releases or concert dates.

You can still get the album on Amazon and both sets are for sale at iTunes.