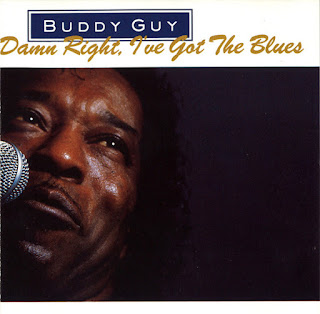 While it may have only reached #136 on Billboard's top 200 albums chart Buddy Guy's most famous release, Damn Right, I've Got The Blues, is considered his commercial comeback after almost a decade away from the studio. It won a Grammy in 1992 for Best Contemporary Blues Album.
Let it be said that these ten songs make a "damn" fine album that is typical of Guy. He doesn't offer listeners anything fresh or innovative - just his always great singing and axe work - and for me that is good enough.
Even though the album is a star-studded affair with Mark Knopfler, Jeff Beck, and Eric Clapton all joining the blues legend on various tracks Guy dominates the sessions - as he should - it's his record. The classic rockers are simply supporting players who blend in as sidemen. If they were replaced by studio players I couldn't tell the difference.
The drummer is the late Richie Hayward, a longtime member of Little Feat who lays down a solid groove for Guy to work with on every song including mainstream blues-rock tracks such as John Hiatt's "Where Is The Next One Coming From" and yet another cover of "Mustang Sally." The latter may be overdone, but when it's played well - as it is here - it's always a welcome listen.
"Black Night" is a flawless, slow burning blues with great contributions from two lesser known sidemen - Pete Wingfield on piano and Mick Weaver on organ.
There are three originals including the title track and a great instrumental that closes the album, "Rememberin' Stevie" - a tribute to Guy's friend, Stevie Ray Vaughan.
There is nothing subtle about much of Guy's music. It's not for everybody, but modern blues fans should relish this fifty-four minute masterpiece without any reservations.
Blues Buddy Guy