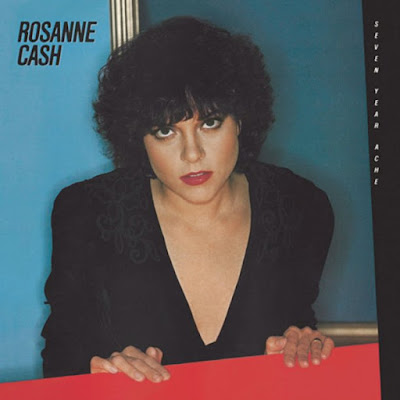 On the cover to her third album, Seven Year Ache, Rosanne Cash looks more like a rock star - or Linda Ronstadt's younger sister - than one of the most respected country artists on the scene today. I know this has nothing to do with the discussion that follows but I just thought it's an interesting little tidbit I'd throw in to begin this post.
Cash has always had a beautiful alto voice that helped her become an absolute powerhouse on the country music charts. She enjoyed ten #1 singles, but this album contained the only one that ever reached Billboard's Hot 100 where its title song peaked at #22 in 1981. It also went to #6 on the Adult Contemporary survey.
"Seven Year Ache" sounds more like a 70s soft-rock record made by Laurel Canyon singer-songwriters than a country tune, and maybe that accounts for its crossover appeal. It was Cash's commercial breakthrough and became her most famous song. It's also the only one she must play at every live performance.
It's mid-tempo arrangement makes the track sound more uplifting than it really is because the cryptic lyrics appear to be about a man who is searching for fulfillment elsewhere after becoming unsatisfied with his marriage. Reportedly, the twenty-four year old Cash wrote the song after a fight with her first husband - country musician, Rodney Crowell - but their relationship endured for a long time and he produced the entire album for her. They didn't divorce until 1992. The song title appears to be inspired by the Marilyn Monroe movie Seven Year Itch, a romantic-comedy that discussed marital problems in a humorous way.
After Cash completed the song - one of only two the singer composed for the album - she decided to use it as a starting point for a whole collection of songs based on couples who fight, breakup, and get back together again. This long player was the result.
________________________
Almost Hits is an occasional exploration into songs that failed to reach the top 20 on the American Billboard Hot 100. Many have become classics despite what their chart position would indicate.
Almost Hits Country Pop Vocals Rosanne Cash