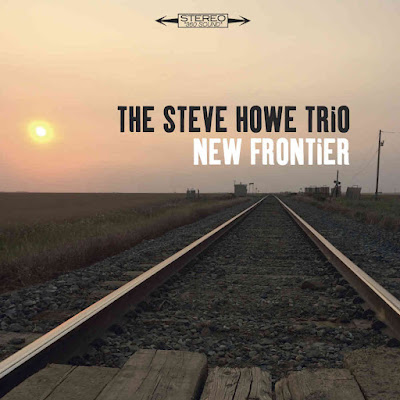 Steve Howe has now been in the spotlight for over fifty years. While the virtuoso will always be remembered as a prominent member of the world's most successful prog-rock band he has also recorded a lot of work outside of Yes - and his later band, Asia - that is worth hearing. Such is the case with New Frontier (2019), the third album - and second studio effort - released under the name of The Steve Howe Trio.
New Frontier is a jazz-fusion set that shares the spotlight with rock just as much as it does jazz. It features Howe on electric and acoustic guitars; Ross Stanley, a quite talented Hammond B3 player; and the leader's son, Dylan Howe, on drums. The boss isn't selfish. Stanley gets lots of space to stretch out and drummer Howe gets to shine when the situation calls for it. The trio doesn't employ a bass player, but there is so much happening on each track that the bottom end isn't missed.
This music isn't for everyone, but for fans of Howe or those looking for something more than straight-ahead jazz these ten instrumentals are for you. If you're an aficionado of Howe's work with Yes, you'll understand how much prog-rock and modern jazz have in common. The guitarist told The Strange Brew that jazzmen Kenny Burrell and Jimmy Smith are inspirations for the band.

On "Left to Chance" you'll hear contributions from Stanley that remind you of Yes's keyboard players and how much the guitarist's interplay with them contributed to the quintet's overall sound. The track's unrepentant mood swings and tempo changes make sure you'll never get bored. At 6:33 it's the longest piece on the record proving there is at least one "Yes man" who learned how to restrain himself.

Howe wrote most of the album with help on three tracks from Bill Bruford, Yes's original drummer. He would be a perfect fit for the trio if the younger Howe wasn't already occupying that chair.

This album was a surprise find and a worthy one. It's also a must listen for a certain type of music fan.