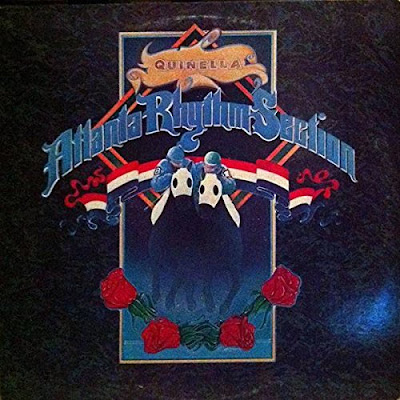 It's probably cheating to say that Quinella is a last album, but since I've always loved Atlanta Rhythm Section I'm making an exception today.

ARS's fortunes declined steadily with each successive album charting lower than the previous one after Champagne Jam reached #7 in 1978. Quinella - their tenth release - peaked at only #70 on Billboard's top 200 album chart, but the single, "Alien," did much better, climbing all the way to #29 on the Hot 100. This would be the last time the group would make either of those lists.

Singer Ronnie Hammond joined ARS in time to record their second album, and original drummer, Robert Nix, was replaced by Roy Yeager for The Boys From Doraville, the album before Quinella. The latter was the only change made to their classic lineup during their hitmaking years.

After Quinella, the sextet became a revolving door with new members joining and old ones returning - then leaving again. By 1989, only two original members and Hammond remained when they recorded their next album, Truth In A Structured Form, after an eight year break. For legal reasons only the group's initials appeared on the album instead of using their original, full name. So, even though this nine song set was technically not their last album in a lot of ways it is because they were never the same band again.

ARS featured Barry Bailey and J. R. Cobb on the dual lead guitars that were a staple of so many Southern rockers but that is where the similarity to many of their peers ended. While their influences were quite obvious they offered a tighter sound than the majority of their brethren did. They didn't jam endlessly, and for a few years they became masters of the radio friendly, four minute, rock song. Mostly because of Hammond's vocals they could also impress you with their ballads. He was the perfect singer to achieve ARS's musical goals and he was my favorite lead singer of all the Southern rockers with the exception of Greg Allman. All of these traits are featured in abundance on Quinella.

The album opens with a typical Southern rocker, the excellent, riff filled, "Homesick. "Alien" could have easily found a home on soft-rock radio with its smooth 70s harmonies during the chorus. The title track sounds like it could have been a Little Feat song.

Despite what the title may lead you to believe, "Outlaw Music" is a ballad that should appeal to the good ol' boys. It's about a dude who ran away to Texas because Tennessee was too "tame," but now he's home and wants to settle down with the woman he missed more than he anticipated. He wonders if she still wants him.

"Southern Exposure" - on which Hammond laments that the traditional lifestyle of the South is "gone with the wind" - is another pleasant love letter to their home. It mined the same lyrical territory as "Doraville" and "Jesus Hearted People" from ARS's terrific, 1974 record, Third Annual Pipe Dream - indicating that the group may have been running out of fresh ideas.

Quinella is a very good last record even if it really isn't one.

Unfortunately, five of the six members of Atlanta Rhythm Section's hitmaking lineup have passed away including their producer, Buddy Buie, who was almost the seventh member. So, it's not possible they'll get another chance to make a new "last album."

_______________________________________
In the majority of cases recording artists' most revered and famous records are made early in their careers, but there are some noteworthy final records that should be included in your collection. To qualify as a "last album"  the set must have been recorded as new material intended to be released to the public as a complete album but not necessarily the last one.
Atlanta Rhythm Section Classic Rock Last Albums Southern Rock