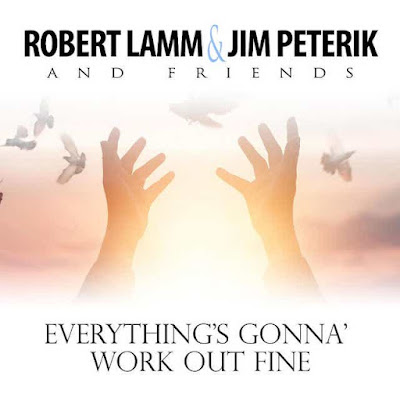 Most classic rock fans know who Robert Lamm is, but it's less likely they're familiar with Jim Peterik.
Peterik was the leader of The Ides of March - a horn band like Chicago - who had a #2 hit with "Vehicle" way back in 1970. He had additional success later as one of the founders of Survivor  - a band that turned "Eye of the Tiger" into a big hit after recording it for Rocky III in 1982.
In the sadly closed-down year of 2020 Peterik wrote the lyrics to a Robert Lamm track that sounds somewhat like the pop side of Chicago's long-gone, 70s jazz-rock. Lamm enlisted help from some of his newer bandmates using file sharing instead of bringing them together to record the single "Everything's Gonna Work Out Fine."
By the mid-70s Chicago decided to become a more mainstream band. "Everything" represents the four lane highway many of their original fans wish they merged onto in the 80s instead of the muddy, rutted, dirt road to nowhere they got stuck on for well over a decade. If only Lamm and his band had a musical GPS during the Reagan administration maybe they wouldn't have gotten so lost.
The song has a little bit of a Steely Dan influence and it may have great appeal to the yacht rock crowd. (I'll let you decide if that's a good thing.) It also has a nice Lamm vocal with assistance from his current bandmate, Neil Donnell.
Peterik's lyrics show a quite light-hearted, optimistic side that is in contrast to the darkest days of the COVID lockdown that might be anathema to music lovers who want to hear something more substantial. If you're someone who criticized the Paul McCartney-Stevie Wonder duet "Ebony and Ivory" for being too pollyanish about a very serious topic you may have the same thoughts here, but you can't fault Lamm and Peterik for trying to brighten our day. I'm one who appreciates their efforts.
Chicago Pop Vocals Robert Lamm Soft Rock