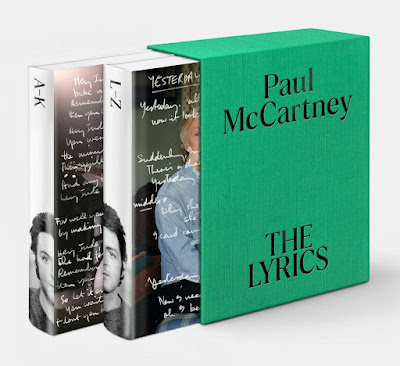 Paul McCartney has repeatedly turned down requests to write his autobiography. Instead, he said we can get a good accounting of his life through "my songs, hundreds of them, which I've learned serve much the same purpose. And these songs span my entire life."
In his own excellent foreword to his newly published, voluminous anthology the seventy-nine year old icon wrote, "Fans or readers, or even critics, who really want to learn more about my life should read my lyrics, which might reveal more than any single book about The Beatles could do."
The result is The Lyrics, a huge, two volume book set that discusses 154 songs McCartney wrote throughout his life - from 1956 to the present - with The Beatles, Wings, and as a solo artist.
There is also an introduction written by Irish poet, Paul Muldoon, who helped edit and assemble the book for McCartney. Muldoon is not his ghostwriter, the prose all belongs to the talented man listed as the author.
Songs include many major hits such as "Hey Jude," "Eight Days A Week," "She Loves You," "Get Back," and "Silly Love Songs" as well as deep album tracks and numerous obscurities from his more recent releases such as "My Valentine" from his Kisses On the Bottom record and his latest, McCartney III. He also made room for "I Lost My Little Girl," the first song he ever wrote way back in 1956.
The ex-Beatle also wrote about songs he composed for other artists including "Goodbye" for Mary Hopkin and "Come and Get It," a hit for Badfinger. McCartney's own version was never released until decades later on the Fab Four's Anthology III.
In addition to the lyrics of the songs he chose - all listed alphabetically - there are over 600 photos from McCartney's own collection. Many of them have never been seen before. These include paintings, personal artifacts, handwritten lyrics, and many images of his family, friends and bandmates.
There are personal reminiscences about how each of the selected songs came to be and about the people who inspired McCartney - his parents, William Shakespeare, Allen Ginsberg, Lewis Carroll, John Lennon, one of his high school teachers, and the many rockers who preceded him.
Here are some examples of interesting trivia and insights found throughout the two volumes.
"And I Love Her" - This is one of the knighted one's great love ballads, but what makes it even better is that when George Martin told him it needed a good introduction George Harrison immediately came up with the famous riff that opens and continues throughout the song. (It's my humble opinion that the riff is so important to this track from A Hard Day's Night that Harrison should have been given a composing credit.)
"Arrow Through Me" - This is where the hall of famer actually admits that Linda McCartney was not a top notch keyboard player. He said that while she got the job done her chief contribution to Wings was as a cheerleader.
"Helen Wheels" - While it's obvious that the song title is a play on the phrase "hell on wheels" we learn that it was also the name of McCartney's Land Rover.
"Helter Skelter" - This song, infamously and tragically misinterpreted by Charlie Manson, is not about a roller coaster as most Americans have come to believe. It's a carnival ride featuring an inverted cone with a sliding board encircling it. The rider uses a mat to slide to the bottom.
"Maybe I'm Amazed" - McCartney is surprised that this is Liza Minelli's favorite song of his. He was expecting her to prefer one of his ballads.
"Ticket To Ride" - This has always been one of my favorite Beatles records. Lennon was right, it's quite a heavy rocker for 1965. Not only does the title refer to a woman purchasing a ticket for some form of public transportation it also refers to a place called Ryde on the Isle of Wight where McCartney's cousin and husband ran a pub. He and Lennon visited there one day and the song was inspired by the memory of their trip.
None of us will ever know what an autobiography from Sir James Paul McCartney would have revealed, but so far he is correct. The Lyrics provides the reader with more personal insights of the Liverpool native than any interview he has ever given or anything else that has ever been published about him in his lifetime.
This two book set is expensive. The list price is $100, and the discounts for shopping online are not steep, so if you intend to buy it keep some space open on your credit card. In fact, the day after Christmas my wife and I went into Barnes & Noble to do some shopping and they announced a big sale: Every hardback book in the store was 50% off for that day only - except for The Lyrics which remained at full price. I'm guessing the author needs the money.
Beatles Classic Rock Music Books and Magazines Paul McCartney Wings