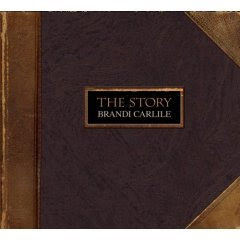 We all know that record sales are not calculated the same way they were thirty years ago when people were still buying physical copies of the music they loved. Things have changed so much in the modern era of streaming. It's much harder to gauge the popularity of a track today, but even with knowing that my favorite song of the 21st Century deserved a better fate.
Sadly, Brandi Carlile's best known single, "The Story," is her only one to ever score a place on Billboard's Hot 100 where it only climbed to #75. Fortunately, the album of the same name did better. It peaked at #41 and that was good enough to earn the young singer-songwriter a gold record.
Produced by the great T-Bone Burnett, "The Story" - written by Carlile's great friend and bandmate, bassist Phil Hanseroth - straddles the boundaries of folk and rock in a way that most records do not, and that is what helps make it a classic. At around :55 into the song Carlile's vocals and personality change completely. The song begins with a sweet voiced folksinger at the mic and then, switching into true Bessie Smith mode, she becomes a hard rocking blues belter as the arrangement changes instantly from soft, acoustic guitar strumming to amps cranked up to ten. Her voice couldn't be more versatile.
"The Story" is a love song that has all of the ingredients an outstanding one needs: great lyrics and sentiment, as well as excellent musicianship played with emotion that matches the words.
The song gained a lot of traction by being featured on Grey's Anatomy in 2007. Carlile also performed it on the late night shows of Jay Leno and Conan O'Brien. It also appeared in a General Motors TV commercial that ran during the 2008 Summer Olympics.
There have been several cover versions, most notably by Dolly Parton and LeAnn Rimes.
______________________________________