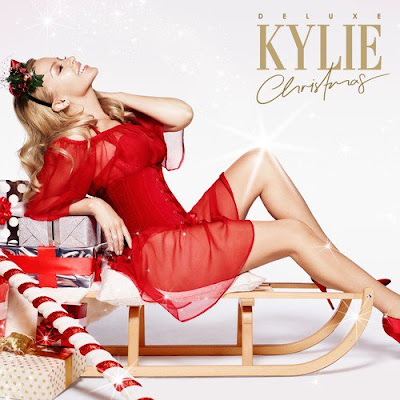 Kylie Minogue is the biggest selling, Australian, female singer of all time so it's hard to believe it took her until 2015 to issue a seasonal album as her thirteenth full length release.
Among the sixteen songs on the deluxe version of Kylie Christmas are four originals and a six song, bonus DVD. It's a fun set of  tunes that covers a lot of ground.

Minogue becomes a female Michael Bublé on both "Winter Wonderland" and "Let It Snow." Each one employs a big band with strings. She succeeds on the rarely covered "Christmas Wrapping," the great Waitresses classic - featuring guest star Iggy Pop - with a fairly straightforward, rocking arrangement that doesn't stray too far afield from the original. Many perennial Christmas standards are pleasantly well done and should bring a smile to your face even though Minogue doesn't necessarily offer many fresh interpretations.

The star proves she has eclectic tastes with a holiday deep track, the little known "2000 Miles," a Chrissie Hynde penned tune originally done by The Pretenders on their outstanding Learning To Crawl LP.

Minogue receives "assistance" from Frank Sinatra on "Santa Claus Is Coming To Town" and James Corden joins her on "Only You," a song that has nothing to do with Christmas. One of Minogue's own compositions, "100 Degrees," is a quite danceable, full blown, disco track with her sister, Dannii, as the featured guest.

The only misfire is another unnecessary take of "Santa Baby." Here is a request to all future artists and  producers of holiday albums: DON'T DO IT! Minogue hasn't done a poor job with this moldie oldie about excessive greed, it's just been covered too many times for anyone to care about it anymore, so please just stop.

One year later the album was released again with the subtitle Snow Queen Edition that offers six additional tunes.

Two of Minogue's original songs for the album are featured below.