Buried Treasure: The Revelations - The Cost Of Living (2014) 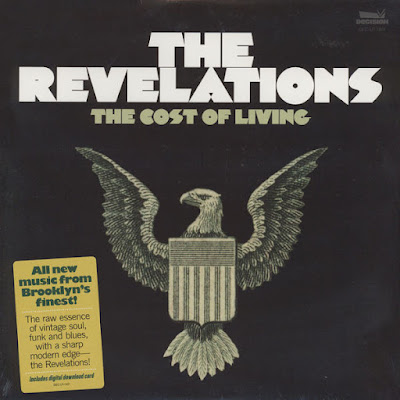 My wife's friend recently gifted me much of her CD collection after she fully digitized it. So far, I've added over 1,200 songs to my iTunes account and my ipod Classic now holds over 18,000 songs. While perusing boxes loaded with her old discs I discovered a 2014 album by a band I never heard of before - The Revelations, a loud, rocking, R&B quartet from Brooklyn, NY.
On the eight song The Cost of Living Wes Mingus is the guitarist, Gintas Janusonis plays drums and the singer is Rell Gaddis who replaced founding member Tre Williams. Bass has always been a revolving door, and on this record the job belonged to Ben Zwerin.
Williams and Gaddis started the band with the former serving as lead singer on two earlier full length albums and an EP. From the beginning, Gaddis wrote for the band and served as a second singer, so when Williams departed he was the obvious choice to become the full time frontman.
The group has a history of working with a host of well known and highly regarded artists. Mingus assisted the recently departed dub and reggae producer Lee "Scratch" Perry as well as versatile hip-hoppers, The Roots. The whole band did composing and production work for Wu-Tang Clan and Ghostface Killah.
Fortunately, you'll find no hip-hop on The Cost of Living. Instead, The Revelations sound like a vintage, funky, rock quartet with a truly soulful singer. There are no synthesizers and they're supported by a real horn section when necessary. The band is loaded with musicianship.
The album was recorded in Memphis which is fitting because The Revelations sound more like Beale Street than Brooklyn, and you'll never find anything wrong with that.
Buried Treasure Rhythm and Blues Rock & Roll