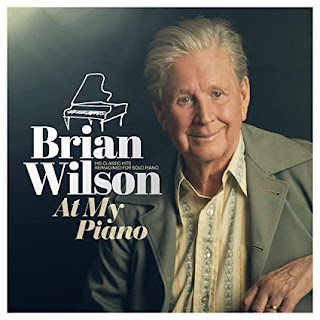 How great is Brian Wilson? If you listen to At My Piano - his brand new album of fifteen unadorned piano solos played by The Beach Boys' resident genius - you'll quickly understand the extent of his talent as a melodicist. The simplicity of his new set allows the listener to fully appreciate the beauty of Wilson's creations played on a musical instrument that is truly irresistible when played by a great talent.

Some critics have said that Wilson took the easy way out, that these songs have been redone too many times to be appreciated another time, but I counter with this: how many artists have issued multiple live albums with arrangements played very close to the original records or released remixes of old songs just to sell more product? At least Wilson offered listeners something quite different, although he admits that the original idea belonged to his record label, Decca. However, it was a request he willingly undertook.

There are many well known hits, including: "God Only Knows," "Wouldn't It Be Nice," "In My Room," "The Warmth Of The Sun," "Don't Worry, Baby" "Good Vibrations" and "California Girls."

Two deep tracks from Pet Sounds - "You Still Believe In Me" and "I Just Wasn't Made For These Times" - are gorgeous in this setting.

We're also treated to a handful of lesser known tracks from the band's post-Pet Sounds albums: "Surf's Up," "Til I Die," and one of Wilson's personal favorites, "Friends."  The star also included a solo track he often closes his concerts with, "Love and Mercy."

Hardcore fans will likely appreciate "Sketches of Smile," a medley of three songs from the legendary Smile project including "Our Prayer," "Heroes and Villains," and "Wonderful." The real oddity is "Mt. Vernon Farewell" taken from Mt. Vernon and Fairway, the eccentric, fairy tale EP The Beach Boys included as a bonus with their 1973 Holland LP.

The compositions featured on At My Piano are older than the music played on most oldies radio stations these days, but each one is freshly painted by a true pop wizard. There is much to enjoy.