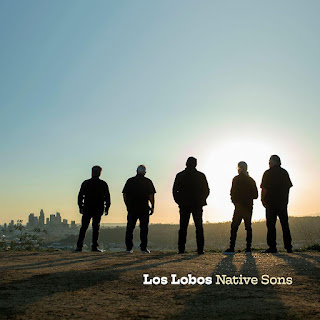 Los Lobos's Chicano based rock never has been, and almost certainly never will be appreciated by the masses, and that's OK. They've made themselves a viable force in rock music, consistently making excellent records loved by critics and a large, devoted cult of which I am a member. They're a great success.
The Los Angeles quintet is still in business with the same five man lineup they've rolled out since How Will The Wolf Survive became their breakthrough album almost forty years ago.
The brand new Native Sons is the group's fourth set of covers. Previously, they gave us a seven song EP, Ride This; the children's record, Los Lobos Goes Disney; and if you want to count movie soundtracks you can add La Bamba to the list.
I've written here before that artists often release cover albums when they've lost their muse but this new record is not one of those times. These veterans have never been afraid to issue cover albums interspersed with releases of their own compositions.
This collection of thirteen cover songs and one new original is a tribute to the music of the band's hometown. The Beach Boys, Jackson Browne, Buffalo Springfield and War are some of the highly successful artists they included on the album.
David Hidalgo and company also pay homage to lesser known local acts that didn't break nationally, and as expected, they put a lot of time and care into these tracks. To most listeners the record won't sound like rehash because a lot of these songs should be new to their ears. The group take their hats off to local heroes Thee Midnighters (Love Special Delivery) and cult bands like The Blasters (Flat Top Joint). Other SoCal favorites saluted here are Lalo Guerrero y Sus Cincos Lobos ("Los Chucos Suaves"), Willie Bobo ("Dichoso"), Don & Dewey ("Farmer John"), and The Jaguars (the instrumental "Where Lovers Go"). Also included is the title track, the only group original on the album.
As always, the song selection is impeccable and Los Lobos use all of their various influences - Tex-Mex, rock, R&B, blues, Latin and more - to prove once again that they are among the top roots rock bands in America.
It's time these eclectic musicians are inducted into the Rock and Roll Hall of Fame. Unfortunately, they were only nominated once and failed to make the cut.
TRACK LISTING & ORIGINAL ARTIST
Love Special Delivery - Thee Midnighters
Misery - Barrett Strong
Bluebird -Buffalo Springfield
For What It's Worth -Buffalo Springfield
Los Chucos Suaves -Lalo Guerrero y Sus Cincos Lobos
Jamaica Say You Will - Jackson Browne
Never No More - Percy Mayfield
Native Son - Los Lobos original
Farmer John - Don & Dewey
Dichoso - Willie Bobo
Sail On, Sailor -The Beach Boys
The World Is a Ghetto - War
Flat Top Joint - The Blasters
Where Lovers Go - The Jaguars
​
Los Lobos Rock 'n Roll