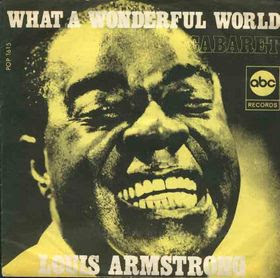 Louis Armstrong was a jazz giant who also made a lot of pop records that were marginally considered jazz, and one of his more famous songs, "What A Wonderful World," falls into the latter category. It's also a record with an interesting backstory.
This classic was first released in 1967. It failed to chart in America because the president of  ABC Records, Larry Newton, hated it and refused to promote it. In fact, he even tried to stop the recording session, but - believe it or not - he was locked out of the studio enabling Armstrong to finish his work.
Newton wanted a tune similar to Armstrong's huge hit, "Hello Dolly," that went to #1 just three years earlier. Instead, the star produced this slow, string laden ballad with his typically rough but pleasing vocals that everyone recognizes today.
The lengthy session also had other distractions. The musicians were interrupted twice more by freight train whistles that forced them to work overtime. So, to insure the orchestra was properly paid for their additional hours Armstrong agreed to accept only the minimum union scale of $250 for his contribution.
Even though it only sold around 1,000 copies in America Newton was wrong about the song because in the United Kingdom it went all the way to #1. At the time it made Armstrong the oldest man to reach that pinnacle in the UK.
Wikipedia said that the record was the biggest selling single in the Britain in 1968, but conversely they also posted in a separate article that the honor belonged to The Beatles' "Hey Jude." I haven't been able to confirm either claim but there is more evidence elsewhere that the Liverpool quartet holds that distinction.
In 1988 "What A Wonderful World" was prominently featured in the Robin Williams film, Good Morning, Viet Nam, and it was released as a single in the USA for a second time. Twenty-one years after its original release the movie helped it climb to #32 on the Hot 100 and all the way to #1 in Australia. Eventually, the song became so popular worldwide that it sold 2,173,000 digital downloads by 2014.
There have been many cover versions. Believe it or not, Joey Ramone recorded it for his last album. The best one is by Hawaiian singer Iz Kamakawiwoʻole who released it as a medley with "Over the Rainbow" in 1993.
The trumpet genius's version was inducted into the Grammy Hall of Fame in 1999.
______________________________________
Almost Hits is an occasional exploration into songs that failed to reach the top 20 on the American Billboard Hot 100. Many have become classics despite what their chart position would indicate.
Almost Hits Jazz Louis Armstrong Pop Vocals