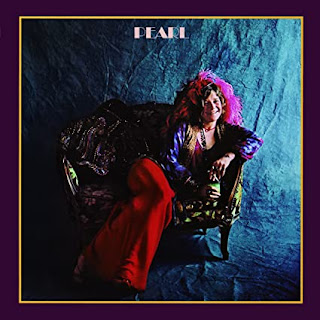 In the majority of  cases recording artists' most revered and  famous records are made early in their careers. Later, many of them will "jump the shark" - as the saying goes - or recede into the background as pop music tastes change. Unless you're a diehard fan of a particular artist many listeners will not even know what an artist's last album is. Beginning today, I'm hoping to change that by running a brand new, occasional series named Last Albums.

To qualify as a last album it must have been recorded as a set of new material that was intended to be released to the public as a complete album but not necessarily the last one. Live albums, greatest hits or "best of" collections and compilations will not be included, nor will posthumous releases of leftover tracks cobbled together to make a final album.

The first one, covered below, has become a blues-rock classic.

Janis Joplin only made four studio albums in her lifetime. There were two with Big Brother and the Holding Company, and after she left them for her brief solo career she only recorded two more. Her most loved, most famous and best selling album, Pearl, was released posthumously.

Pearl - a nickname given to Joplin by her friends - was not 100% completed upon her death. One track, ironically titled "Buried Alive In The Blues," was released on the set as an instrumental because Joplin passed away from a heroin overdose the day before she was to record vocals for it.

Pearl is a terrific, ten song LP for a number of reasons. Despite Big Brother's greater success that resulted mostly from Joplin's singing, her new backing group, Full Tilt Boogie Band was a better fit for her. They were a tighter outfit than Big Brother and helped Joplin reign in any vocal excesses she exhibited on her earlier recordings. Her voice was more disciplined but she still sang with a perfect raspy earthiness that kept her original fans happy while earning the Port Arthur, TX native a whole lot of new ones.

Joplin's track selection was outstanding too. The highlight is the song she is most identified with, Kris Kristofferson's "Me and Bobby McGee" (#1 on the US Billboard Hot 100 in early 1971). "Move Over" - one of only two songs she wrote for the record, the other being "Mercedes Benz" - and "Half Moon," composed by John Hall of Orleans fame, are standouts. Another great one is the ballad "Cry Baby."

There is not a substandard track anywhere and even the unintended instrumental is a rewarding listen.

We would all have liked to hear more from both Joplin and Full Tilt Boogie Band but unfortunately, the late 60s too-much-of-a-good-thing lifestyle prevented that from happening. But, we'll always have Pearl. It's a rare example of an artist's last record being the best one.