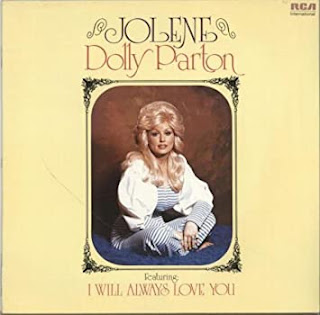 Dolly Parton's "Jolene" went all the way to the #1 spot on both the Canadian and American country charts, but on Billboard's US Hot 100 it only climbed to #60. Despite that, it is Parton's most covered song.
In a 2018 interview the country queen revealed she wrote both "Jolene" and "I Will Always Love You" on the same day. I'd call that a very good day. Both songs appear on the album pictured here.
The song's interesting backstory is revealed in its first verse. "Jolene, Jolene, Jolene, Jolene, I'm begging of you please don't take my man. Jolene, Jolene, Jolene, Jolene, Please don't take him just because you can."
Parton and her new husband, Carl Dean, were in a bank when a gorgeous, red-headed teller flirted with him. This upset the soon-to-be legend so she wrote a song about the incident. Its lyrics never address whether or not Jolene really intended to steal Dean from her. The record's name and the hair color of its protagonist were taken from a young woman who jumped on stage during a show to get Parton's autograph. The singer revealed that the song was a true story to a live audience during a concert in 1988.
"Jolene" became Parton's second solo #1 and it was her first of four straight country chart toppers. The deeply personal record was nominated for a Grammy award for Best Female Country Vocal Performance. The following year it was nominated again in the same category for her live version, but she didn't win either time.
In 2004, Rolling Stone magazine placed "Jolene" at #217 on a list of their Greatest Songs of All Time.
______________________________________
Almost Hits is an occasional exploration into songs that failed to reach the top 20 on the American Billboard Hot 100. Many have become classics despite what their chart position would indicate.
Almost Hits Country Dolly Parton