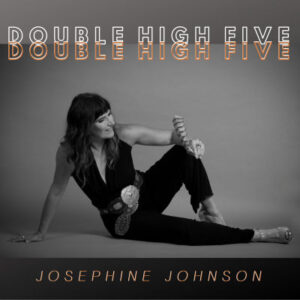 Josephine Johnson has released three full length albums prior to Double High Five, her totally satisfying, brand new, six song EP.
In addition to releasing some really fine music the indie folk-rocker also deserves great praise because she is completely the master of her domain. "I’m not 25, I’ve never been married, I put myself through school, and I book my own shows–I’m the roadie, the writer, the singer, doing exactly what I want to do."
Johnson has a Nashville address but she is constantly on the road teaching music in Georgia, South Carolina and California where she received an MA in English from Humboldt State University. Last year she played 220 gigs despite the pandemic and she can also boast about being an accomplished ukulele player.
The EP is partly inspired by a busted relationship but Johnson's songs sound as if they were born out of love rather than sadness. The varied and vibrant arrangements allow you to feel empathy for Johnson while you're being drawn into her world, and that's good for both the listener and the artist.
Johnson's lyrics on the excellent acoustic blues that is the title track prove the point. "Here's a hug for your soul for all those times you found yourself at a dark crossroads/ C'mon, shine your light, let it show which way is gonna bring you home" and "Raise a glass you're on the path, let it shine, whoa, you're almost home."
"Feather Song" is a foot stomping love song and rocking anthem that begs to be a concert closer. "If I was a feather, I would float within your view, If I was a feather, I’d be iridescent blue, If I was a feather, I’d twist and fall for you. If I was the sun, I’d illuminate your view, If I was the sun, I’d be warm and round and true, If I was the sun, I’d rise and set for you."
The EP's songs include an acoustic instrumental, "In the Field" and a cover of a Sam Phillips song, "Sister Rosetta Goes Before Us." On "Where I Belong" Johnson simply and poetically announces that being with her lover is where she needs to be.
There is no chance of tedium setting in because the diversity of this eighteen minute mini-album will leave you wanting more.
Rock 'n Roll Singer-Songwriter