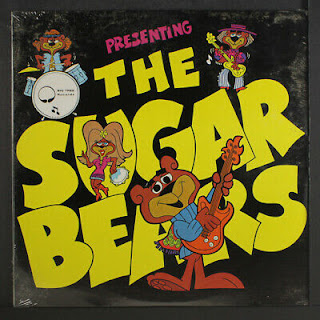 Please, please, please don't send me to musical prison for liking a song based on Sugar Bear, an advertising creation manufactured to sell the breakfast cereal, Sugar Crisp (eventually renamed Golden Crisp to avoid any references to sugar when the sweetener suddenly fell out of favor).
Sugar Bear became so popular that a TV show was built around him that sold product related toys and Christmas ornaments. Crass commercialism all the way!
In 1971 record producer Jimmy Bowen - with some good singers and songwriters - released cardboard cut-out records on the back of Sugar Crisp cereal boxes - five in all.  The song featured four group members: Sugar Bear, Honey Bear, Shoobee Bear, and Doobee Bear.
Bowen also recorded a commercially released album, Presenting The Sugar Bears, with a group that included songwriters Mike Settle, formerly of The New Christy Minstrels and The First Edition; Baker Knight, who wrote "The Wonder of You" - a hit by Elvis Presley; and Kim Carnes, who is mostly famous for "Bette Davis Eyes."
There were three singles culled from the album. The best and most famous was "You Are The One," a song so catchy you can't help but sing and dance to it. Yes, it's pure bubblegum pop, but despite the lightweight lyrics the seasoned professionals involved gave the track some enthusiastic musical heft that Ohio Express and 1910 Fruitgum Company - and others of their ilk - could never deliver. The song went to #51 on the Billboard Hot 100.
______________________________________
Almost Hits is an occasional exploration into songs that failed to reach the top 20 on the American Billboard Hot 100. Many have become classics despite what their chart position would indicate.
Almost Hits Pop Vocals