Almost Hits: Chuck Berry and His Combo - Roll Over Beethoven (1956) 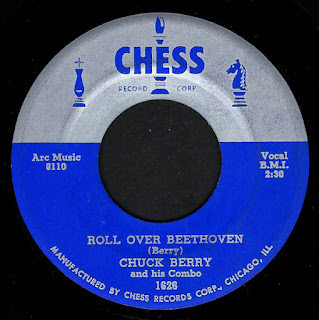 To celebrate the 4th of July, and to improve your mood if necessary, the rock 'n roll doctor is prescribing an extra dose of Almost Hits this month. Take it, it'll be good for you.
"Roll Over Beethoven" (1956) is the oldest song to be featured so far in this fun series of posts. Chuck Berry's famous record dates back to a time before the Billboard Hot 100 existed. On the pop chart of the era the song peaked at #29. It made the top ten on the R&B chart, reaching #7. The single was one of fifty recordings to be added to the National Recording Registry by the Library of Congress and Rolling Stone magazine ranked it at #97 on their list of the 500 greatest songs of all time.
"Roll Over Beethoven" was a very early Berry hit that struck a chord with kids who were among the first rock 'n roll fans. The new, hard-hitting music style was still in its infancy and had not yet achieved the mainstream, worldwide phenomenon it would become in the 1960s. Perhaps that accounts for its less than stellar chart position.
Berry's irreverence and the genre's rebelliousness were clearly apparent as the composer sang to Ludwig von Beethoven and Peter Tchaikovsky, telling them that their days were numbered and that rock 'n roll was the new sheriff in town. According to several sources - including the late writer/musician Cub Koda and Rolling Stone - Berry's inspiration for the song came from his sister who used the family piano to play classical music while the self-taught guitarist preferred popular music.
According to Wikipedia, "the lyrics mention or allude to several popular artists: "Early In the Mornin''" is the title of a Louis Jordan song; "Blue Suede Shoes" refers to the Carl Perkins song; and "hey diddle diddle," from the nursery rhyme The Cat and the Fiddle," is an indirect reference to the Chess recording artist Bo Diddley, who was an accomplished violin player. Although the lyrics mention "rocking" and "rolling", the music that the classics are supposed to step aside for is referred to as "rhythm and blues."
The single was released on the legendary Chess label under the name of Chuck Berry and his Combo. The star-studded quartet included Berry on vocal and guitar; Johnnie Johnson, who is in the Rock and Roll Hall of Fame for his work with Berry, on piano; Willie Dixon, the famous bluesman who wrote "Spoonful," Hoochie Coochie Man," and a whole bunch of other blues standards on bass; and drummer Fred Below, best know for his work with Little Walter.
"Roll Over Beethoven" is one of the most covered songs in history, including notable versions by The Beatles and Electric Light Orchestra on their early albums.
Below is a sensational live performance from French TV that is a couple of minutes longer that Berry's original 2:30 single release. You have no choice but to check it out.
______________________________________
Almost Hits is an occasional exploration into songs that failed to reach the top 20 on the American Billboard Hot 100. Many have become classics despite what their chart position would indicate.

As he has done occasionally in the past, J. A. Bartlett of The Hits Just Keep On Comin' has assisted with his always useful record chart information. Here is a great big thank you, sir.